Howdy Super Friends! Welcome to your weekly installment of Final Order Cutoff Roundup! Final Order Cutoff (FOC) happens every Monday and is our last chance to adjust our ordering numbers on books before they ship out to us! These titles are all on FOC this Monday, August 19th, and most of these books are in shops on 9/11/19. If you would like to guarantee that you get 1 or 10 copies of any of these books, please let us know BEFORE 5PM on Monday August 19th!

From DC this week is the last ArtGerm Catwoman Variant cover for issue #15 featuring Michelle Pfeiffer Catwoman from Batman Returns! After running a gauntlet of assassins to get her hands on the dossier detailing all the illegal activities of Villa Hermosa, Selina Kyle must go up against the big bosses of the criminal underworld. She must deal with their gun-toting mercenaries, yakuza hit women and the masked bounty hunter Lock-Up. All while still carrying a price on her head. Is there a way she can collect both big prizes herself and still walk away alive? 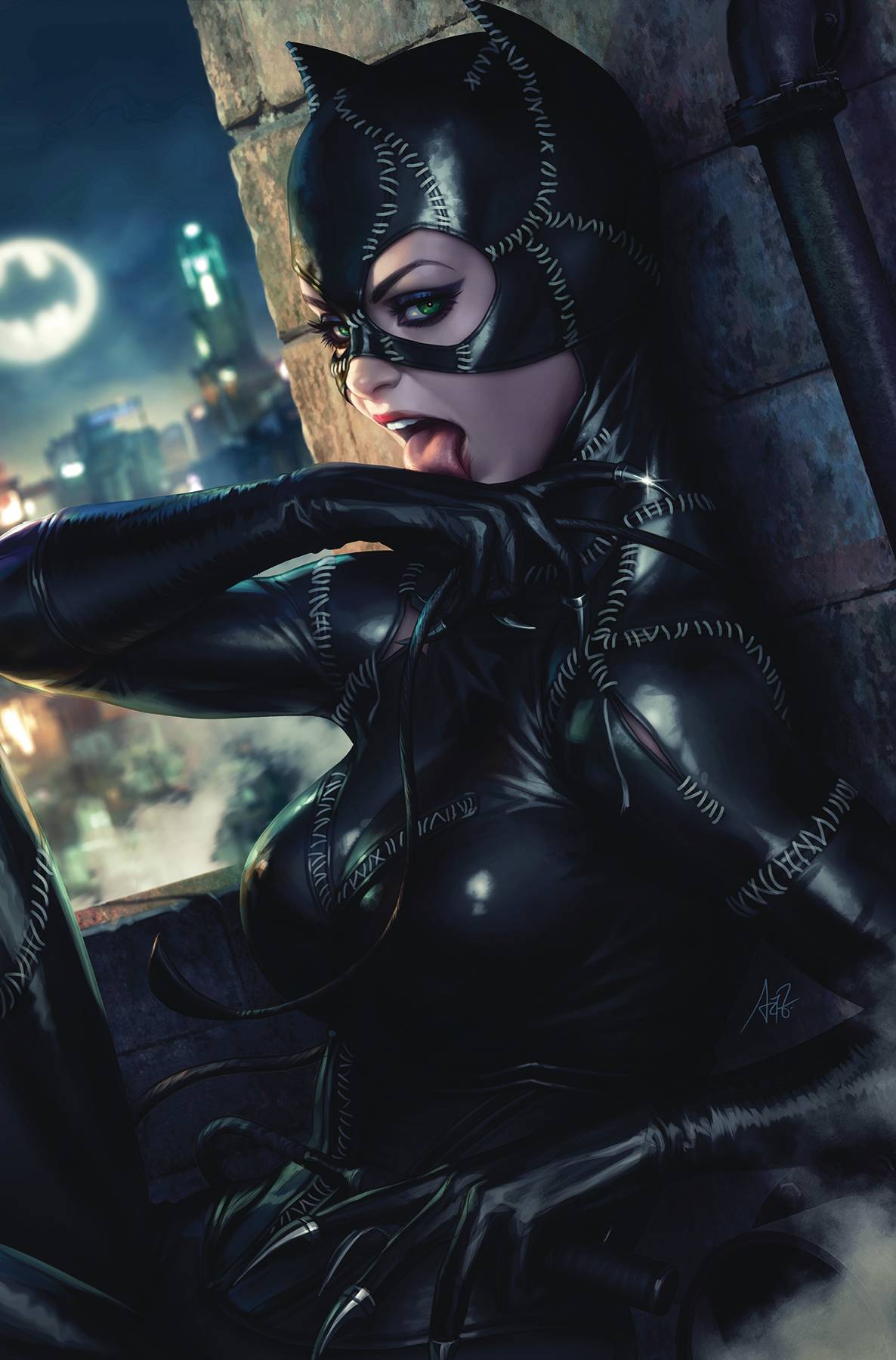 Next up from DC is Gotham City Monsters #1 (of 6). Leviathan has dismantled S.H.A.D.E.-and that means Frankenstein is once again a free agent! Now he can set his sights on his former mentor, Melmoth, the one evil that got away. With bad things happening all across the Multiverse, this may be Frankenstein's last shot at setting things right. Of course, Melmoth has his own agenda, and it's going to take more than a lone monster to take him down. So Frankenstein heads to Gotham City in search of allies and recruits Killer Croc, Lady Clayface, Orca and vampire Andrew Bennett. But will even these dread creatures be enough to save humanity before the entire cosmos collapses in on itself? Main cover by Phillip Tan, variant cover by Frank Cho! 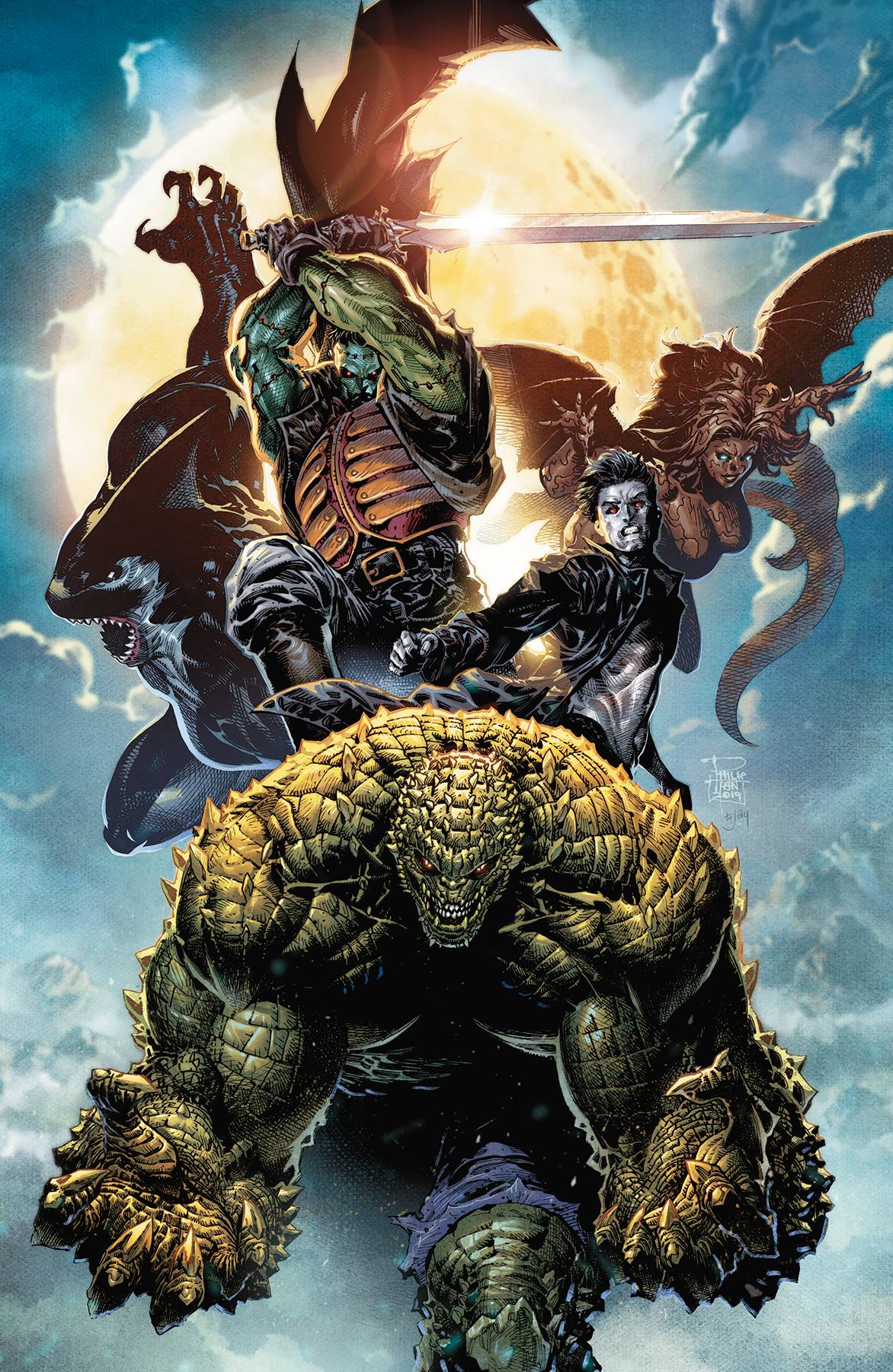 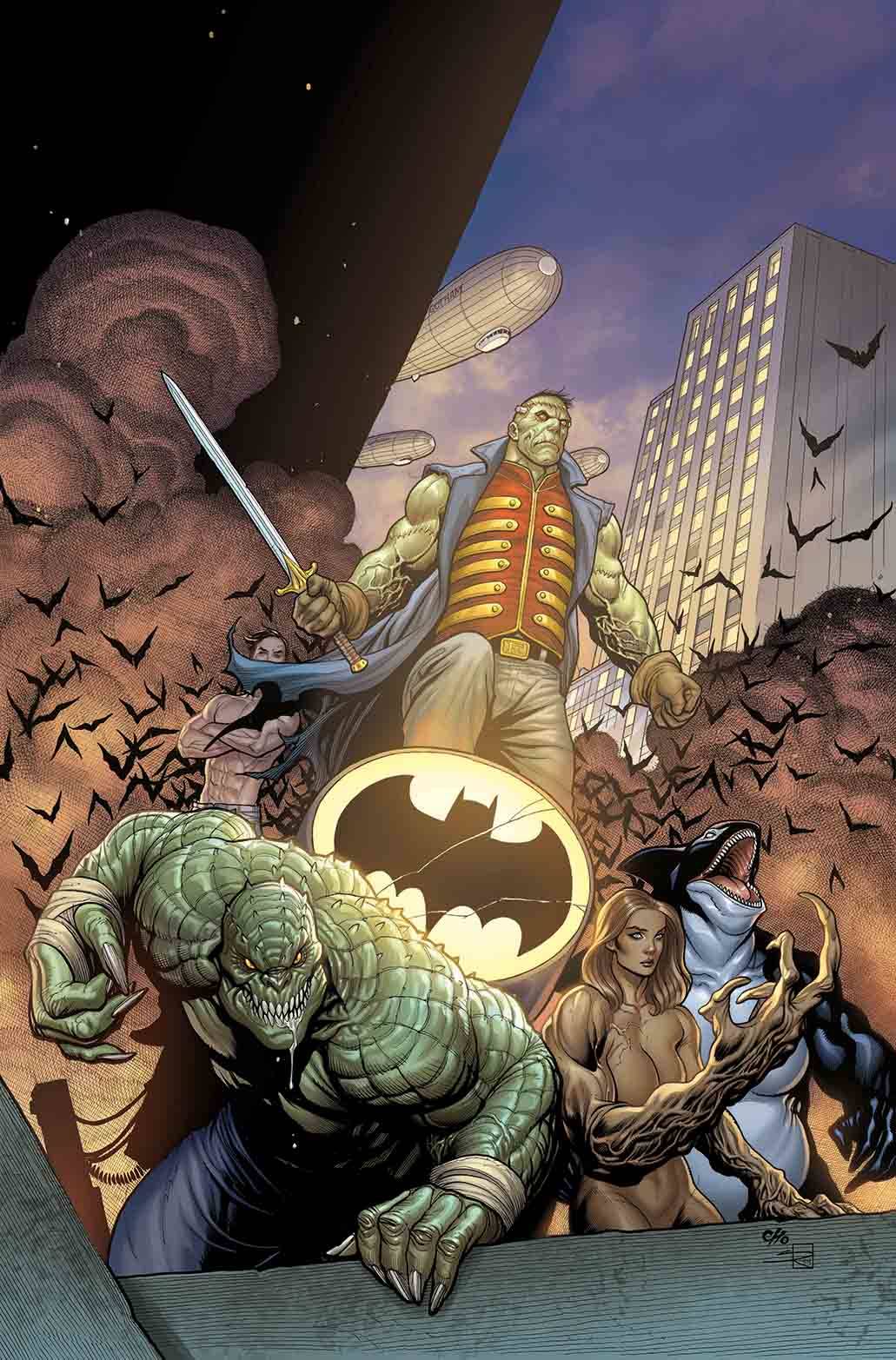 Next from DC is the gorgeous Hawkman #16 variant by In Hyuk Lee! A wounded Hawkman and the Shade are forced to follow the newly empowered Shadow Master into the Shadowlands. In this place, the all-new and all-powerful Shadow Thief controls all. What hopes do a weakened Hawkman and Shade have against a god of shadows? 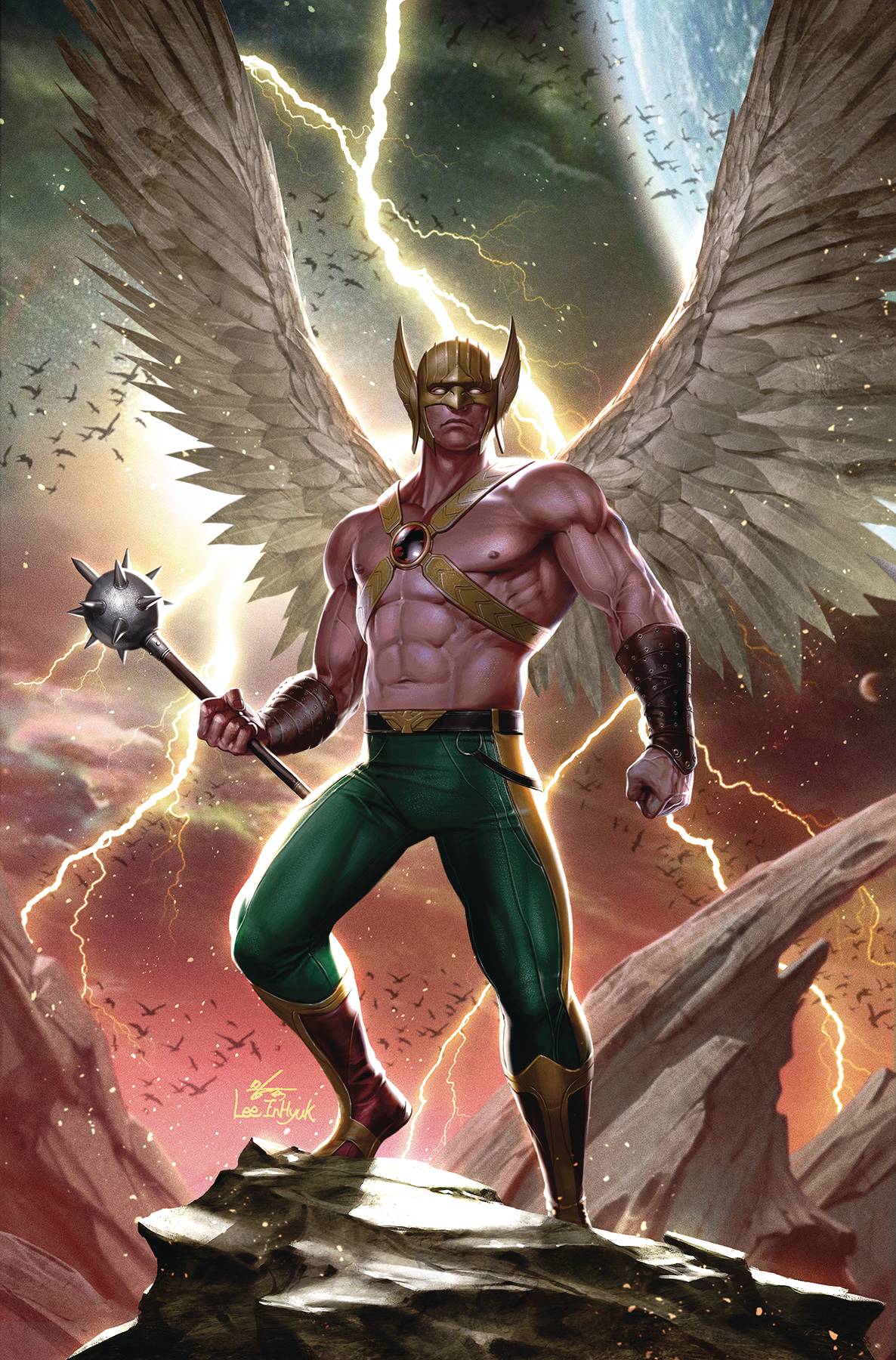 In stores on 9/11 is the Lucio Parillo variant to Justice League Odyssey #13! Sepulkore is activated! The entire Ghost Sector has been imprisoned and enslaved as a new realm of Apokolips, with Darkseid as its supreme ruler! Returned to power, with reborn New Gods at his side and the Ghost Sector as an implacable fortress, Darkseid sets his sights on the remaining universe! Can anyone stand in his way? Where are Justice League Odyssey? And what are the shocking identities of the heralds who now do Darkseid's malevolent bidding? 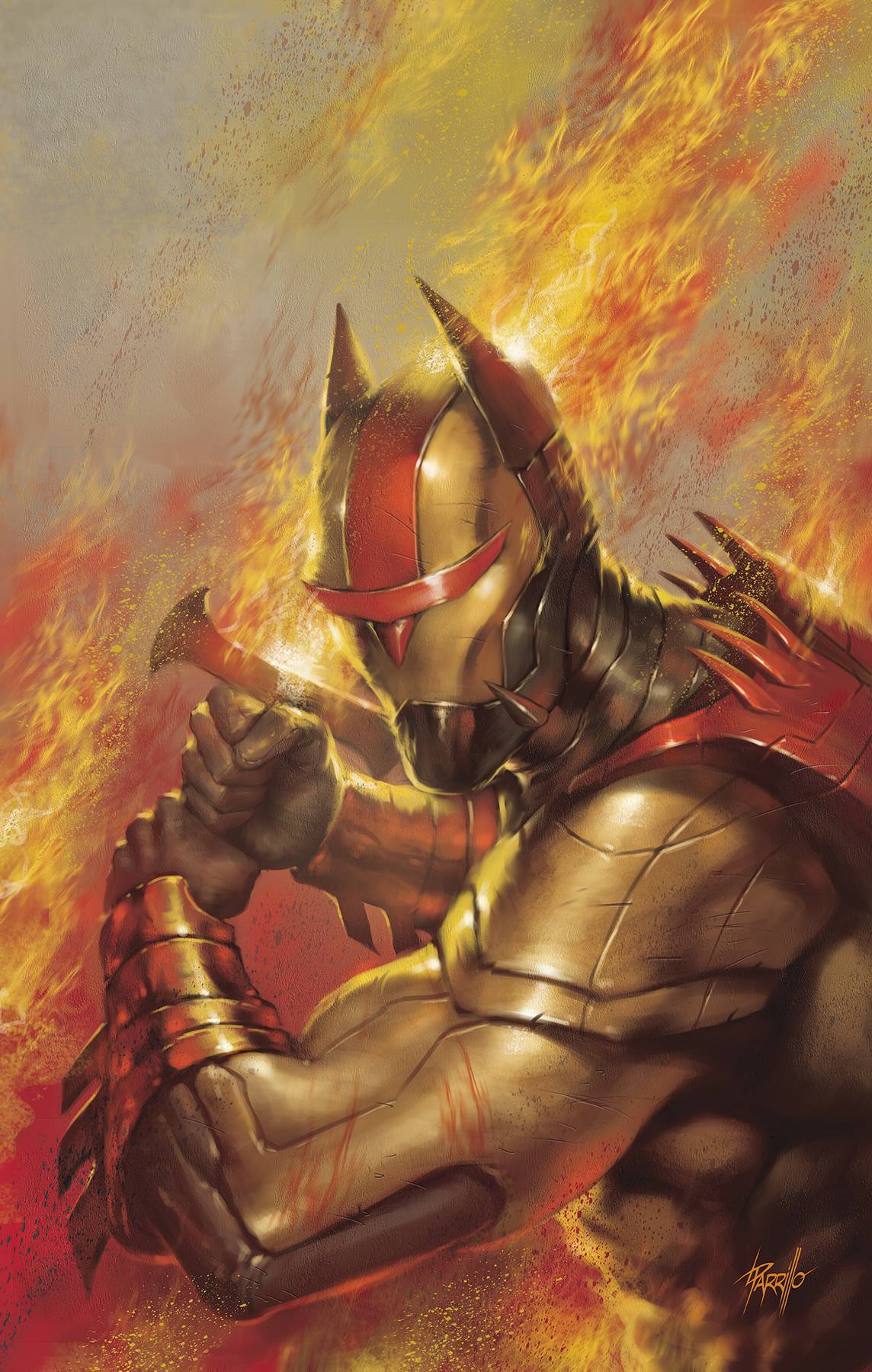 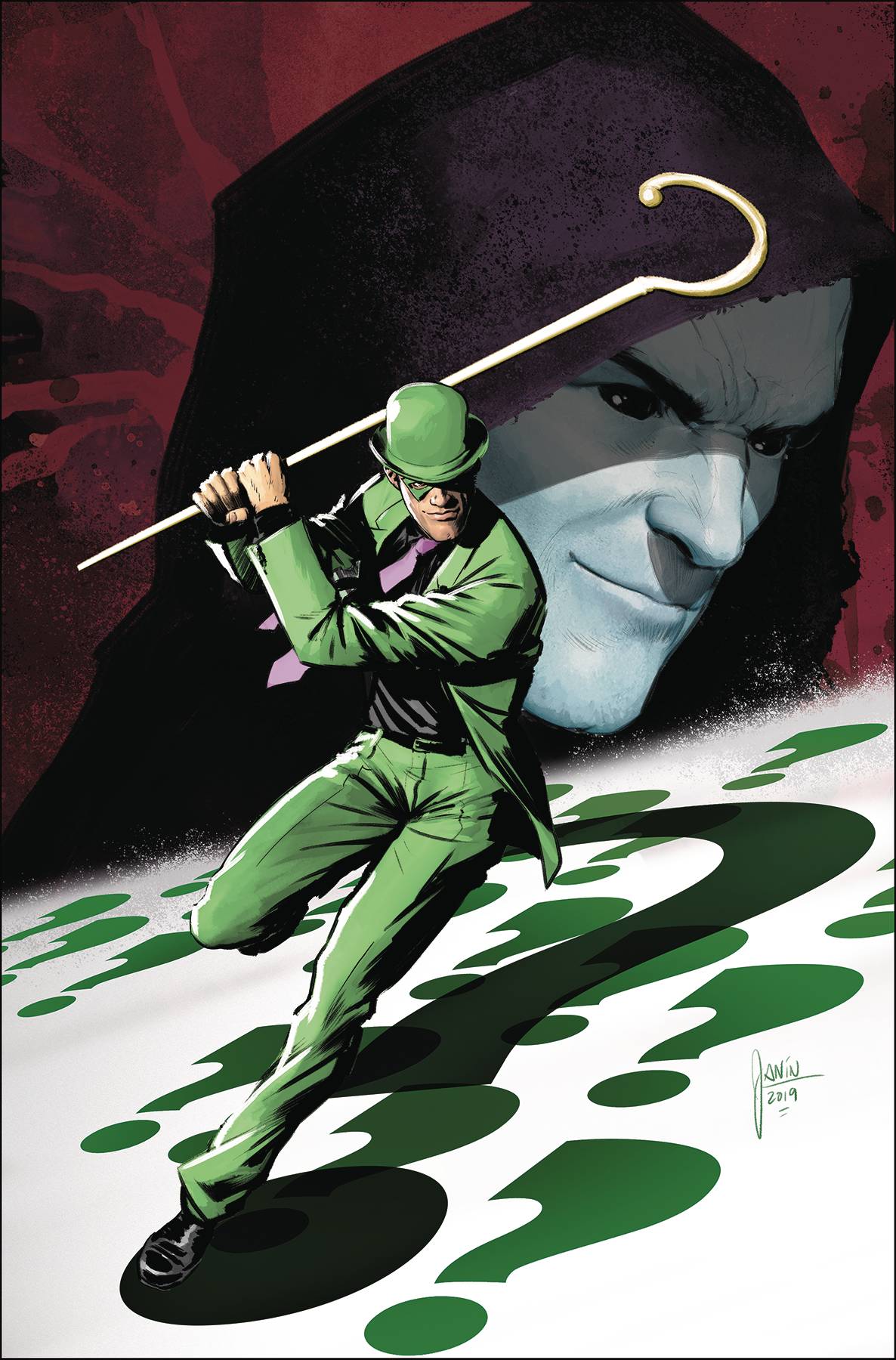 From IDW and in stores on 9/11 is Napoleon Dynamite #1! NAPOLEON DYNAMITE is back and senior year is gonna be flippin' sweet! He's dating Deb, training at a new dojo, and his best friend, Pedro, is student body president. But the good times might not last when a fellow student accuses Pedro of cheating in the election. Can Napoleon and Deb use their special skills to clear their friend before the principal can IMPEACH PEDRO? Maybe, gosh, get off his back! "IMPEACH PEDRO" Part 1 starts here!The cult classic comedy returns-in comic book form! SWEET!Featuring Ligers, Llamas, and Tots, oh my! 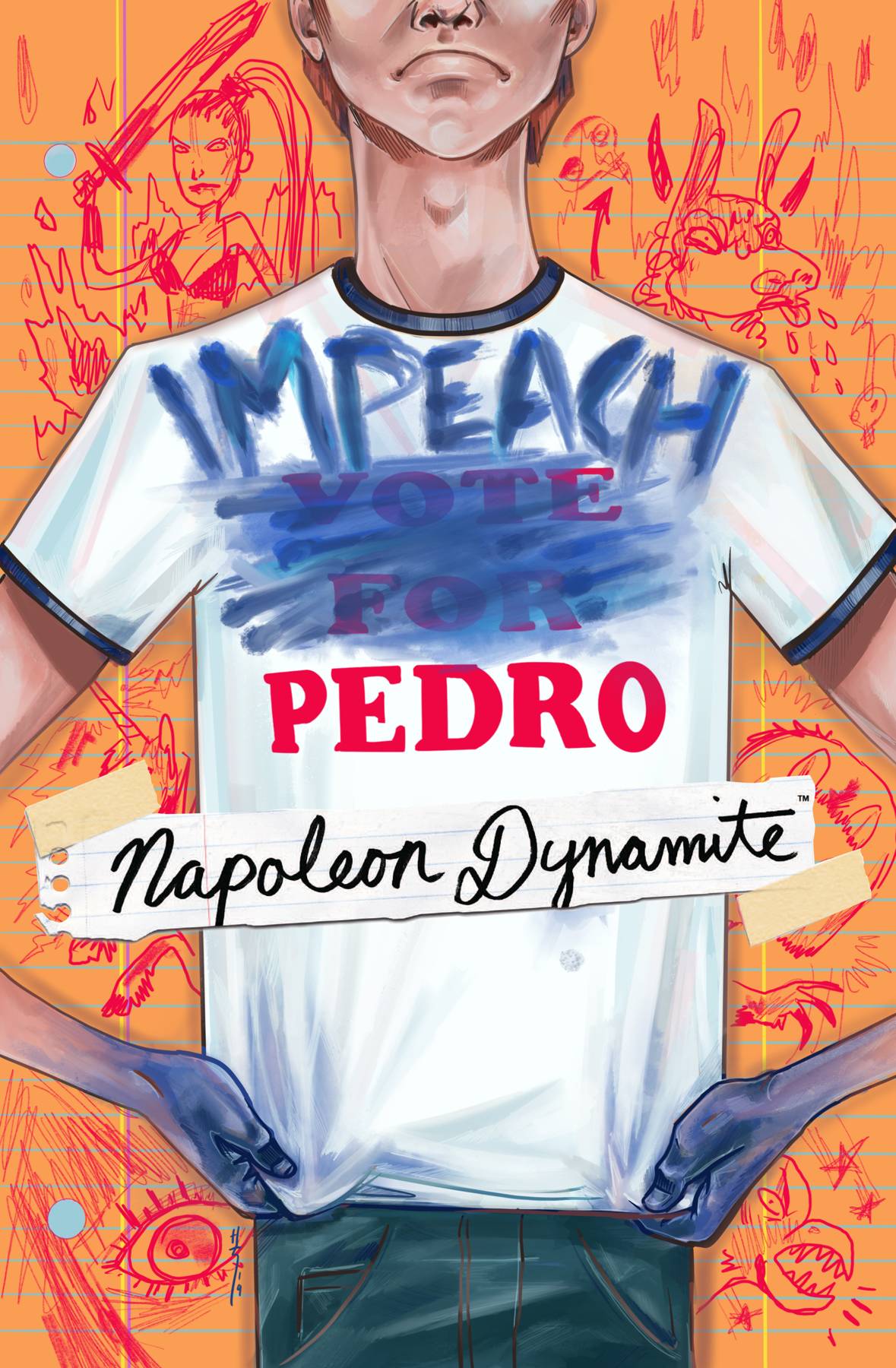 Next up from IDW is Pandemica #1 (of 5). War is brewing in America. A shadow government is preparing to launch "purity bombs" for ethnic cleansing. A small group of scientists and former SpecOps shooters stand in their way. Join the resistance-save the world! Pandemica by New York Times bestseller Jonathan Maberry (V-Wars, Black Panther: Doomwar). From the New York Times Bestselling author of V-Wars, Rot & Ruin, and Patient Zero! 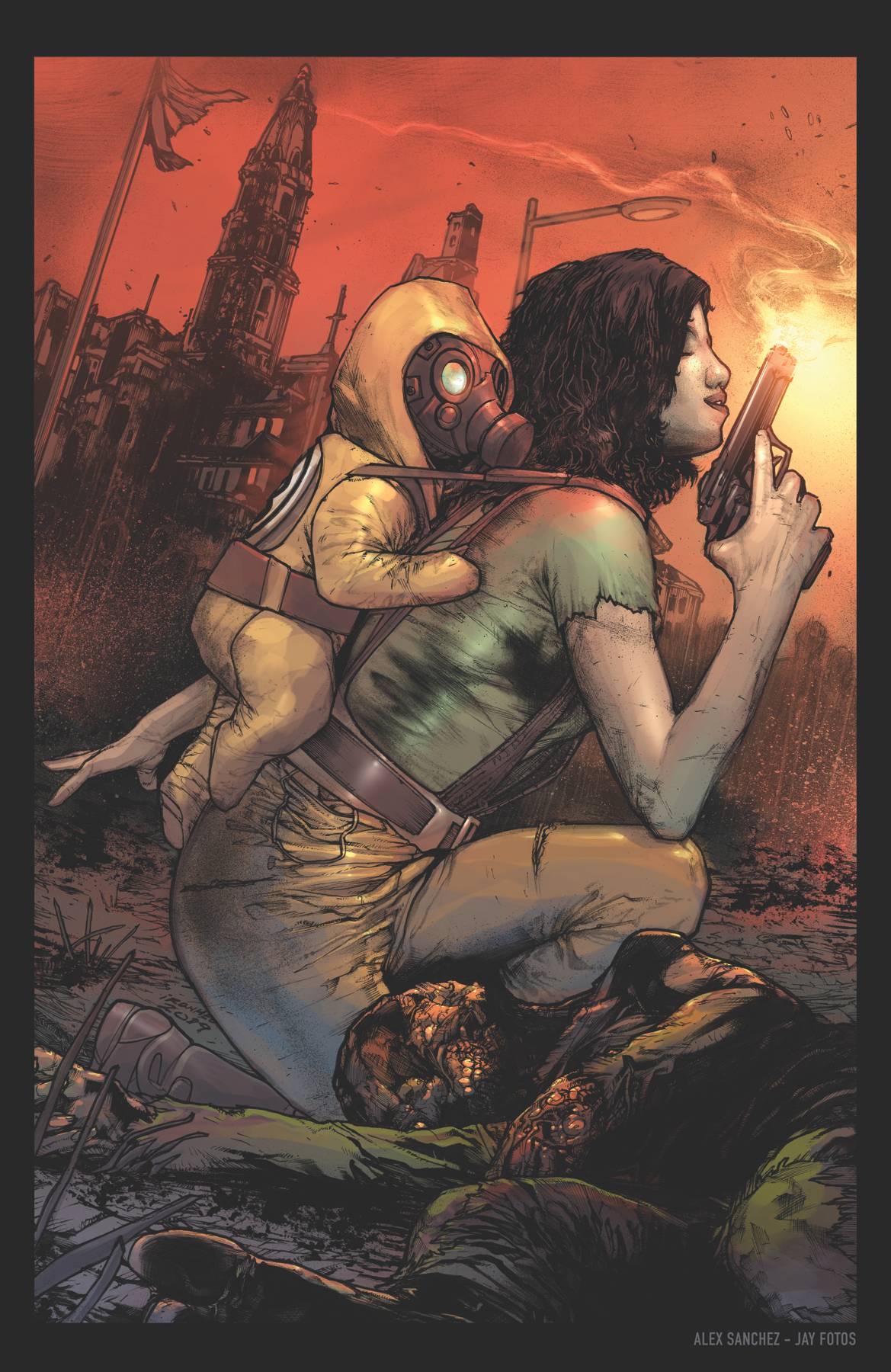 Lastly from IDW is Starcadia Quest #1 (of 3). Out in the Frontier, the toughest jobs in the galaxy are handled by Freelance Adventuring Crews, and on his sixteenth birthday (kinda), the delivery boy known as Starkid sends out a call for the best recruits he can get... at his local Stardollars coffee shop. An action-packed and hilarious QWST begins! A new YA science fiction epic written by James Roberts (Transformers: More Than Meets the Eye, Transformers: Lost Light)!The Starcadia universe is expanding for the very first time!Features a playable adventure based on the comic! Based on the worldwide best-selling tabletop game published by CMON! 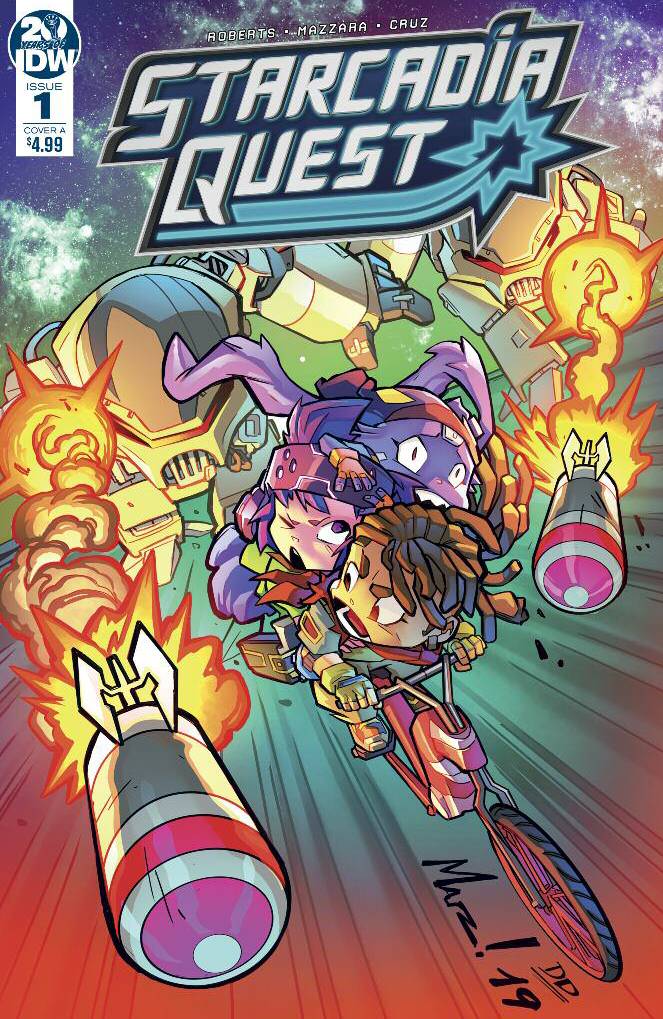 From Image this week and in shops on 9/11 is the return of Warren Ellis and Jason Howard’s Trees with Trees: Three Fates #1 (of 5). The acclaimed series from WARREN ELLIS and JASON HOWARD-which is currently being adapted for television-returns with a brand-new story of murder and ghosts!In the remote Russian village of Toska, there's a dead body by the leg of the Tree that landed eleven years ago. Police sergeant Klara Voranova, still haunted by that day, has no idea how this murder will change everything-nor what awaits her in the Tree's shadow. 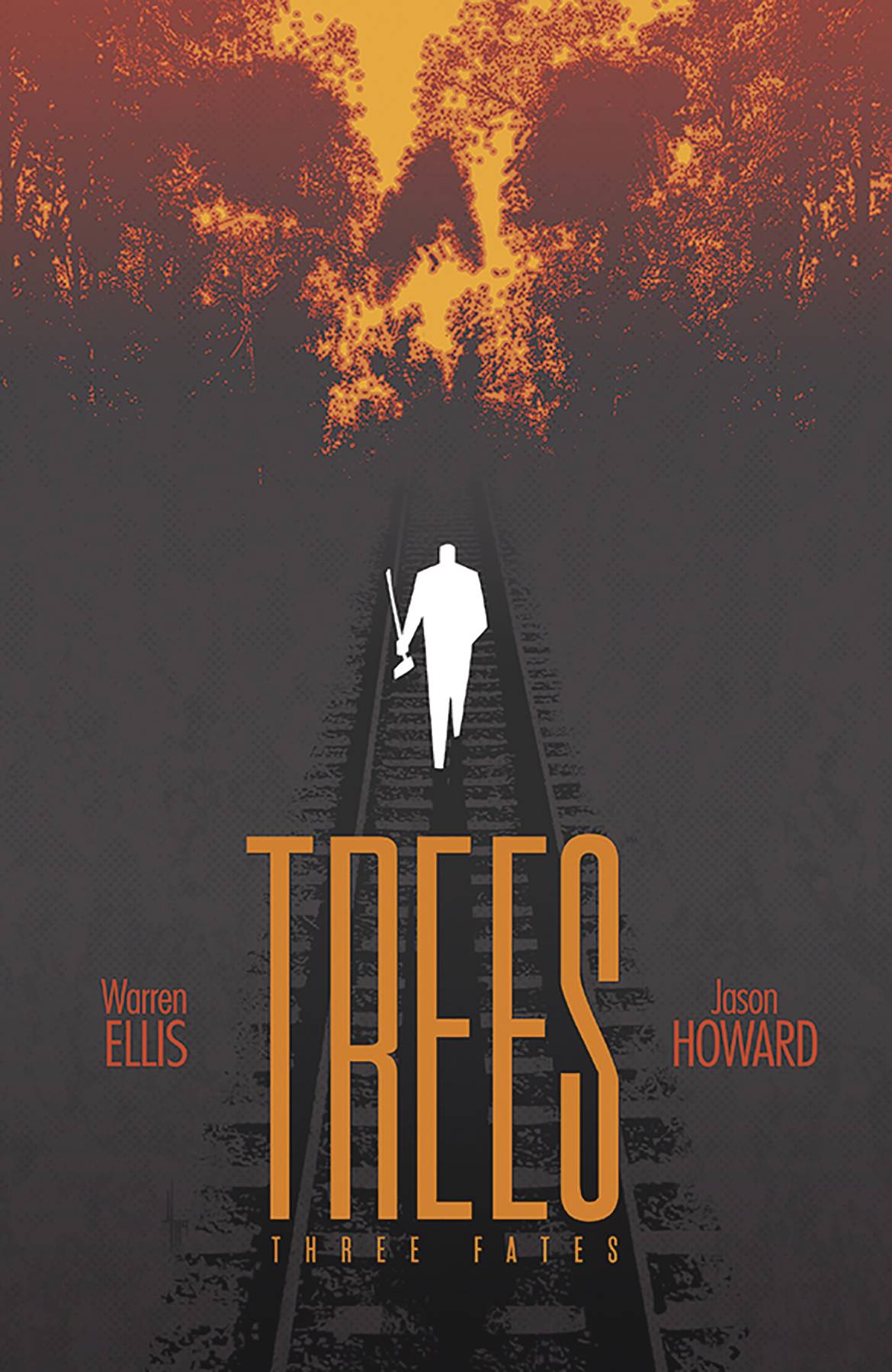 From Marvel and in stores on 9/11 is Absolute Carnage: Symbiote of Vengeance #1 (one-shot). Carnage is hunting down previous symbiote hosts for codices that will unlock a direct link to the symbiote god Knull! And he's not asking nicely...he's taking them by force! Which means former Ghost Rider Alejandra Jones is next on his hit list!With Johnny Blaze preoccupied as Hell's king, it's up to Danny Ketch to ride again and keep Alejandra out of Carnage's clutches!!! 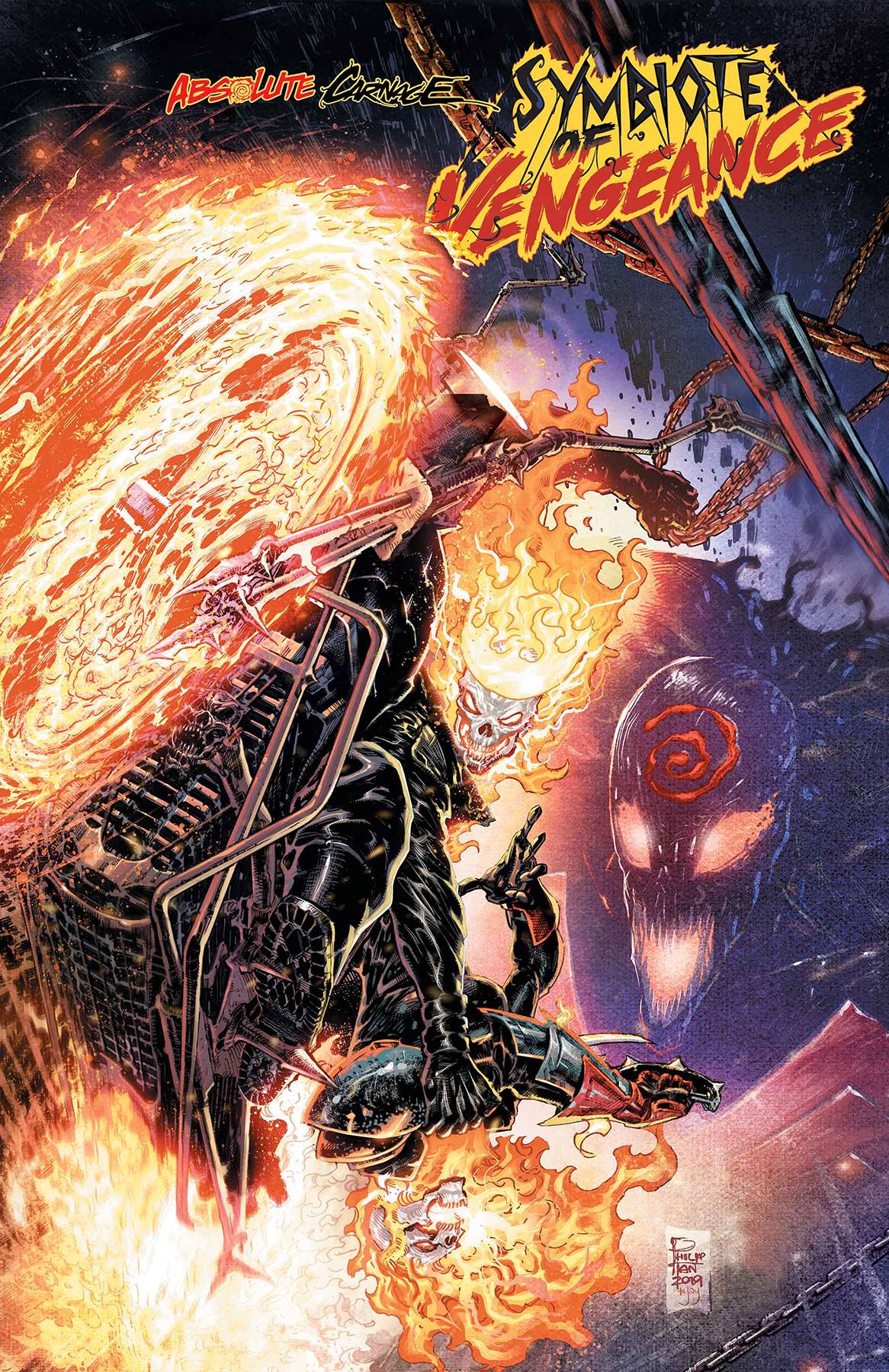 Next from Marvel is Black Cat #4! Another beautiful J Scott Campbell cover here! Someone is sending Black Cat throughout the Marvel Universe to steal from the most insanely secure locales, like Doctor Strange's Sanctum Sanctorum!Next up? 4 Yancy Street, current home of the FANTASTIC FOUR!!!How the heck is Black Cat getting in and out of the FF's new place?! 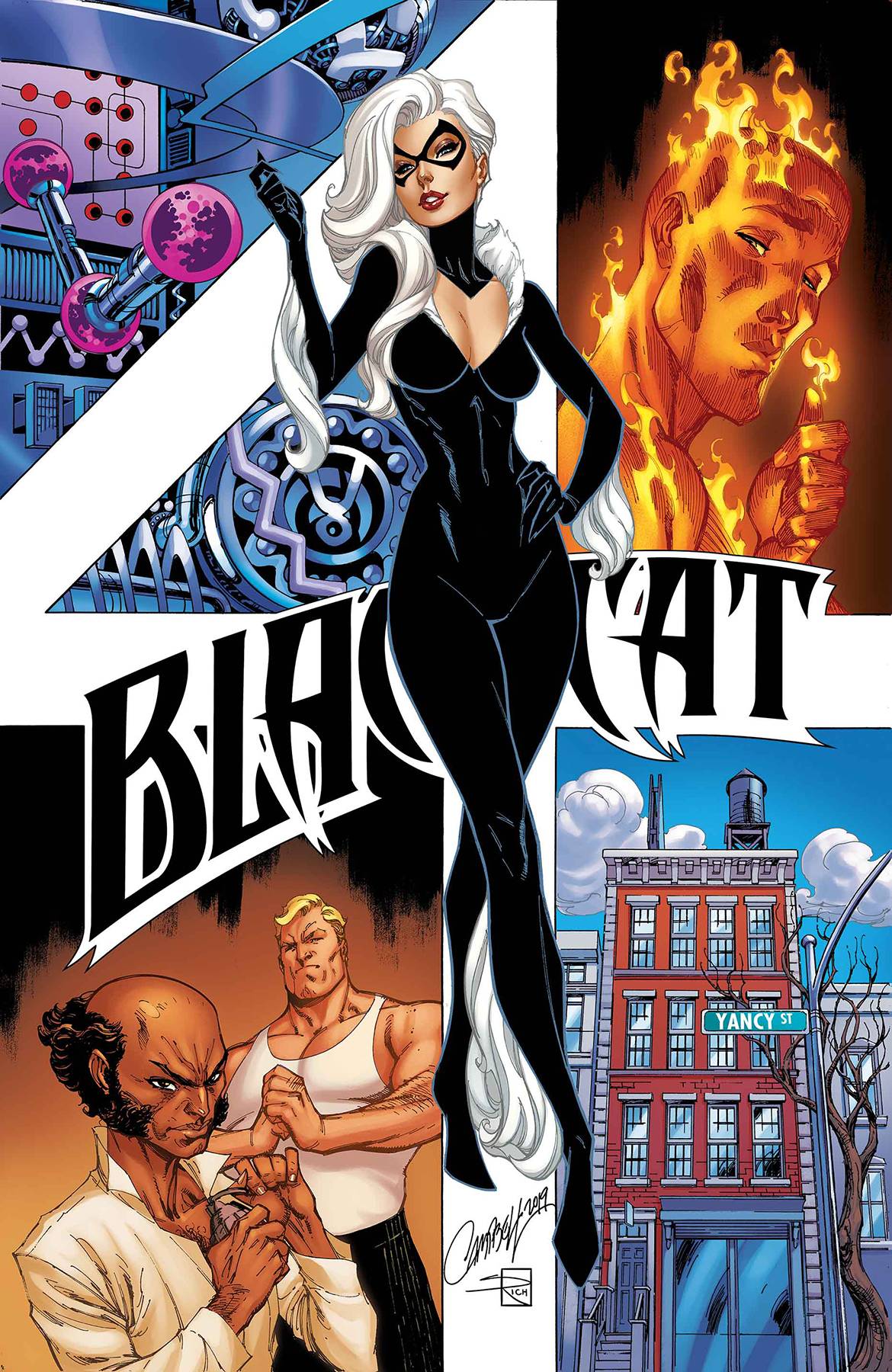 Next from Marvel is Captain Marvel #10! With a beautiful cover by Mark Brooks! FALL TO PIECES!It's official: New hero STAR is in and CAPTAIN MARVEL is out! As Carol struggles to deal with her changing role and unravel the mystery of what is happening to her powers, a risky new alliance she's forged may turn out to be even more dangerous than she expected. Will Carol be willing to make the ultimate sacrifice to save a world that has turned on her? 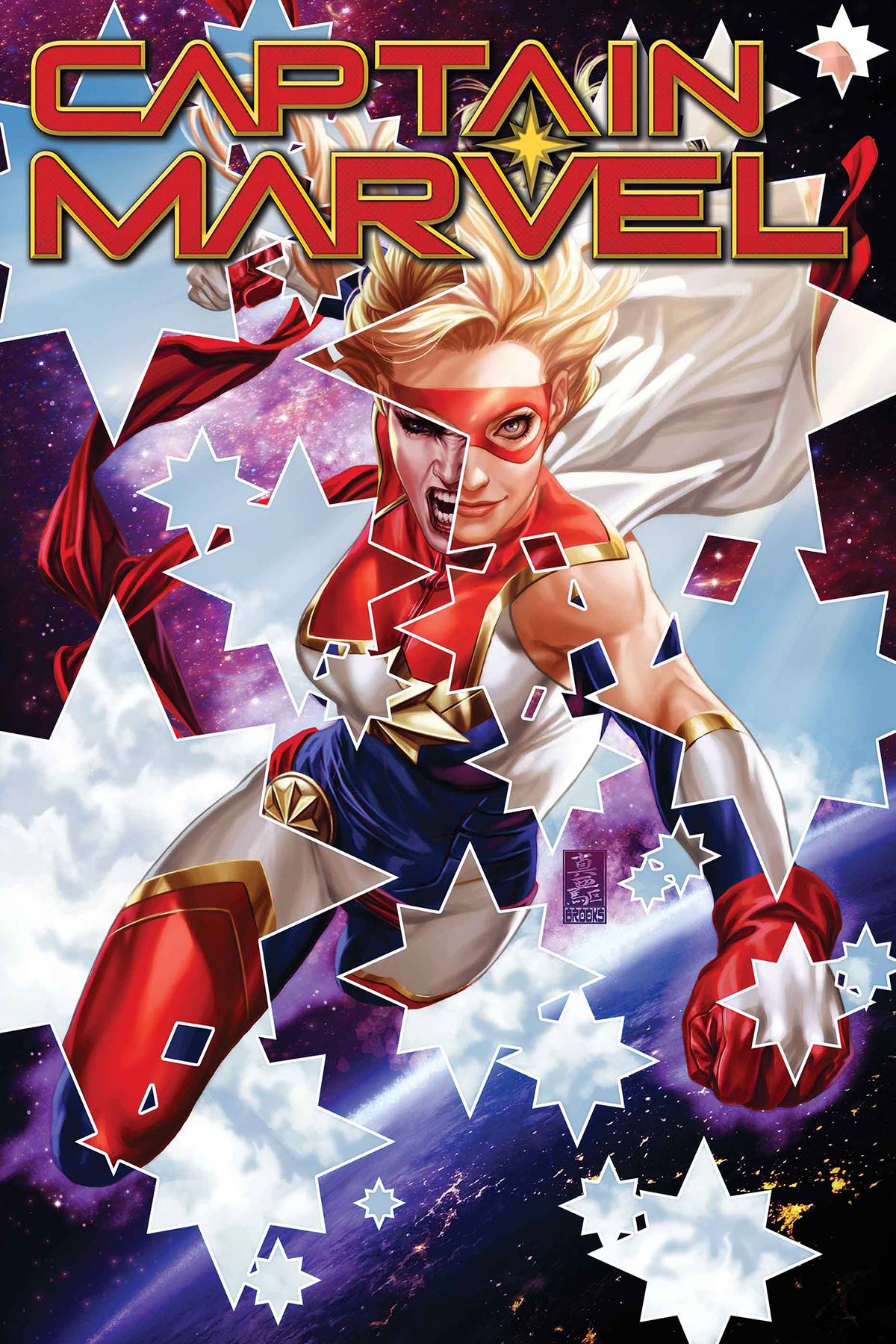 Lets get Crazy! Crazy #1 (one-shot) is in stores on 9/11! MARVEL'S GREATEST...ER...MOST DEMENTED COMIC MAGAZINE!OBNOXIO THE CLOWN is back and so is one of MARVEL'S most hilarious titles thanks to a momentary lapse in sanity on the part of a few over-worked editors and a gang of writers and artists ready to take advantage of it. No super hero is safe! No comic book event is sacred! Will the Marvel Universe ever be the same? Will we want it to? 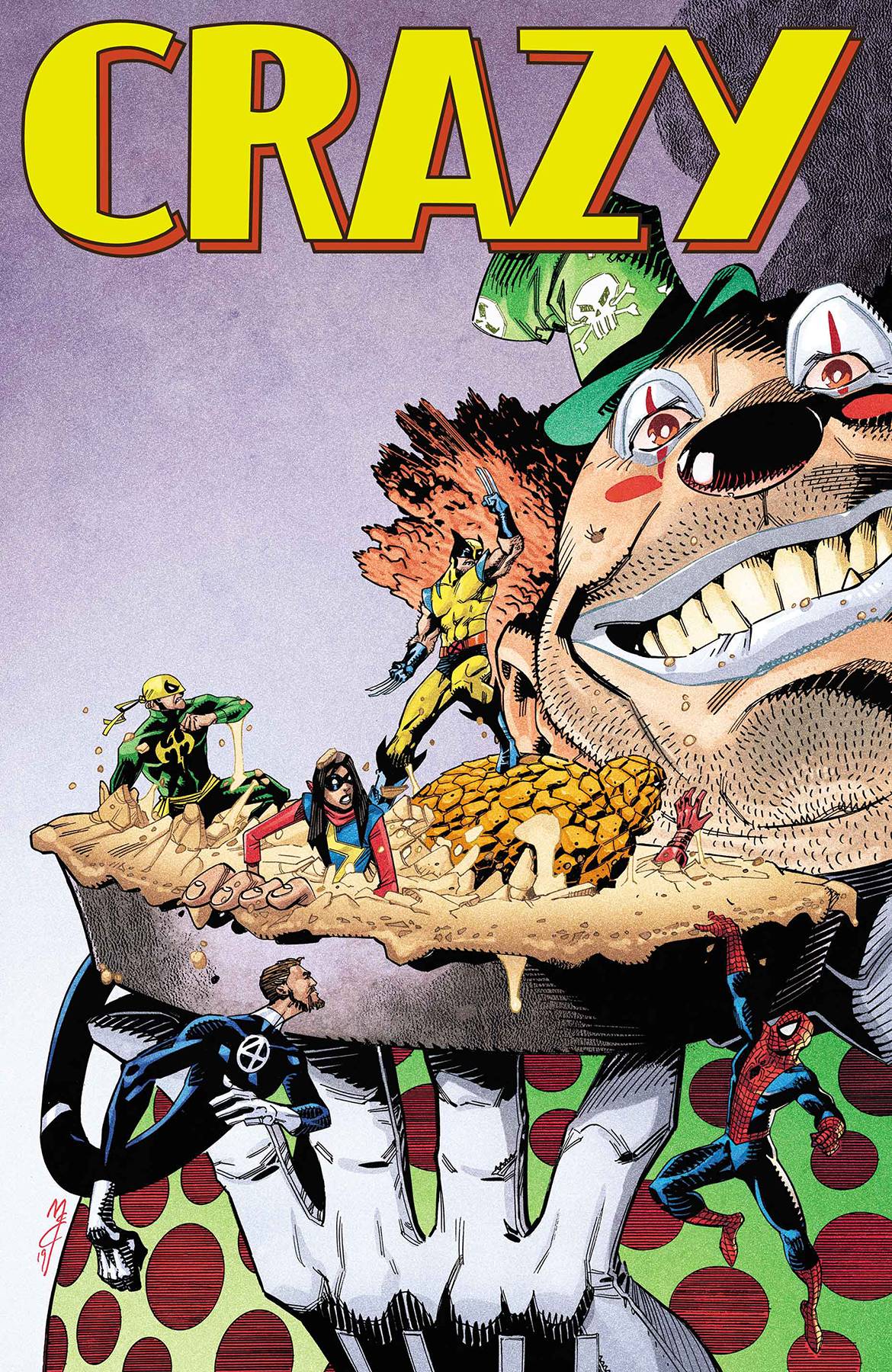 Next from Marvel is King Thor #1 (of 4). SUPERSTARS JASON AARON & ESAD RIBIC CONCLUDE THEIR EPIC THOR STORY!The creators of the legendary THOR: GOD OF THUNDER series that kicked off one of the most epic runs in Marvel history are back together for one last ride with the almighty Lord of Asgard! Seven years ago, Jason and Esad introduced the Thor of the far future, All-Father of a broken realm and a dying universe, as he stood in battle against the Butcher of Gods, wielder of All-Black the Necrosword. Now that nefarious blade has returned, in the hands of Thor's all-time greatest enemy - his brother, Loki - for one final, cataclysmic showdown. Behold the book no comics fan should miss - the celebration of the end of a truly Marvelous era. 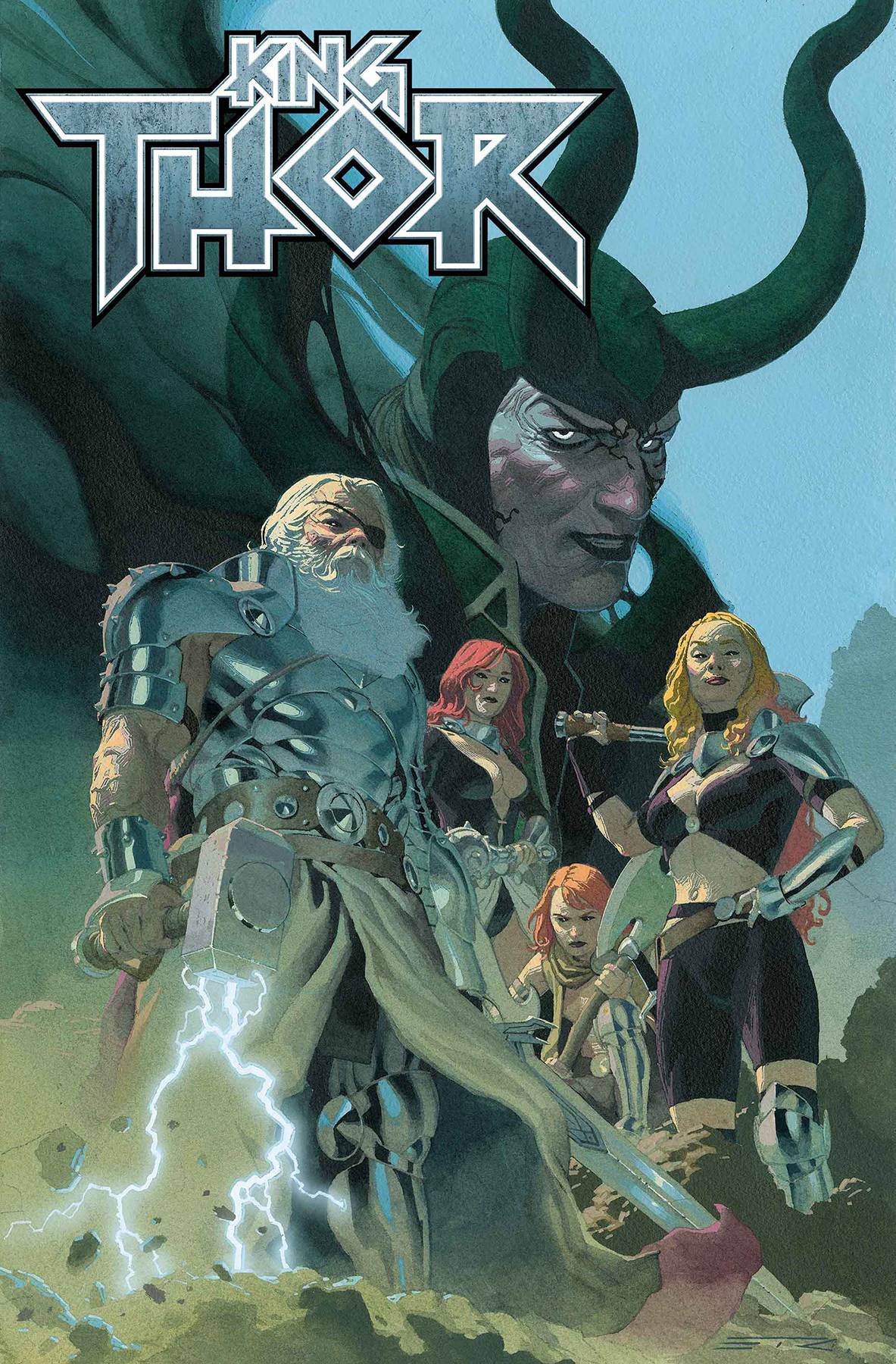 Next up from Marvel this week is Miles Morales Spider Man #10! SPIDER-SEMIQUINCENTENNIAL OR BIG 250th ANNIVERSARY ISSUE?That's right, it's our 250th issue and it's Miles Morales' birthday! But YOU'RE getting all the gifts! A mystery dating back to Miles' first appearance? Answered! A terrifying villain destined to become one of Miles' greatest adversaries? Revealed! Special guests, like maybe Peter Parker: Spider-Man? YOU KNOW IT! All busting out of 25 pages by main series storytellers Saladin Ahmed and Javier Garrón, PLUS a bonus back-up by Ahmed and a special guest artist delving into the history of your new favorite character, STARLING! Your FOMO is well-founded! DON'T MISS IT! 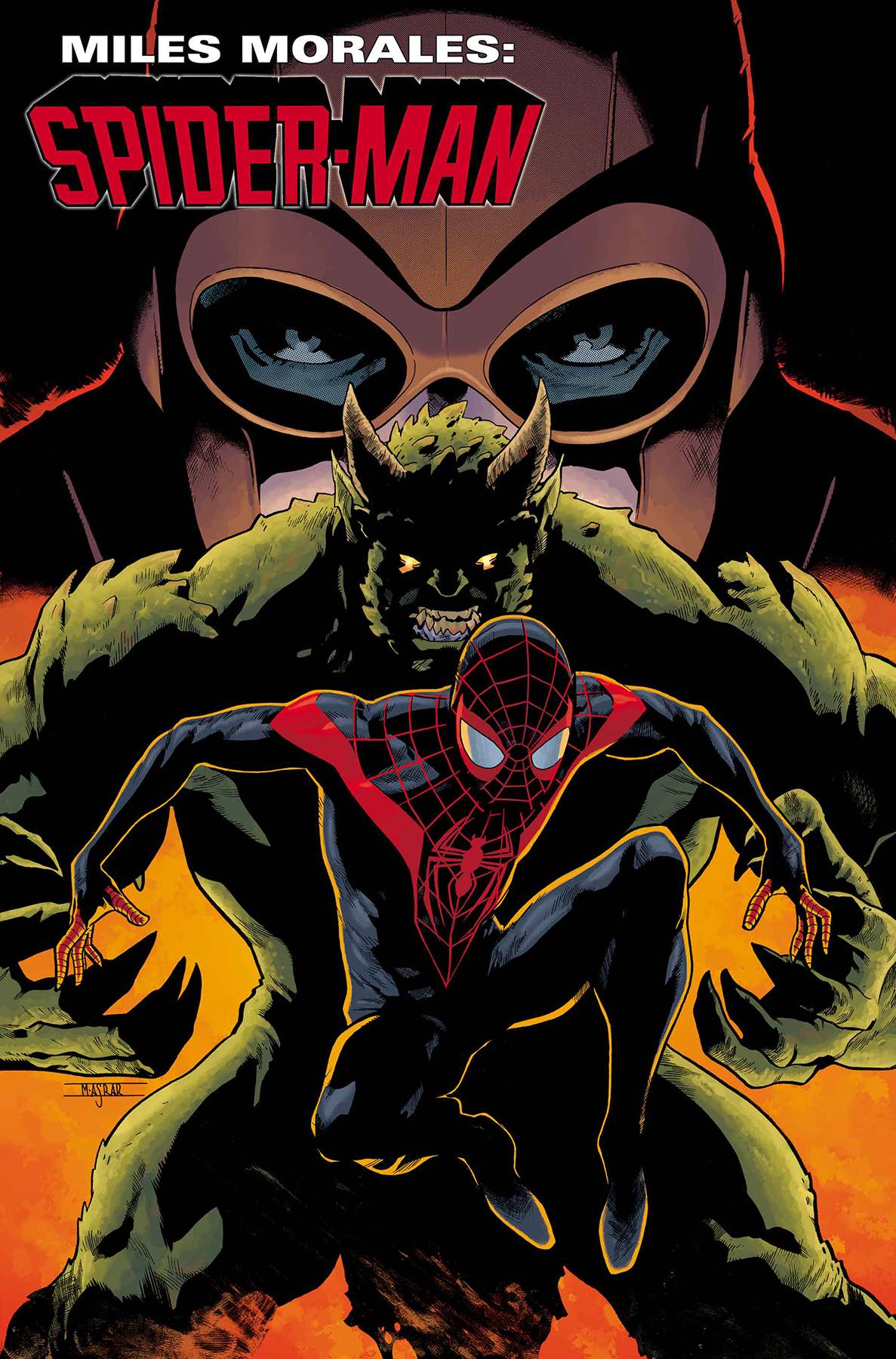 Almost finally from Marvel this week, Moon Knight Annual #1??? MOON KNIGHT BATTLES KANG THE CONQUEROR! KANG THE CONQUEROR has found a way to rewrite history in his own image! But when the chance to settle an ancient grudge against the Egyptian god, Khonshu, tempts Kang, the process is interrupted and time and reality quickly go haywire. Now, Khonshu's avatar, Moon Knight, must find a way to fix the time stream before Kang is able to complete his goal! But with time acting erratically, there's no telling where Moon Knight will end up - or WHEN! 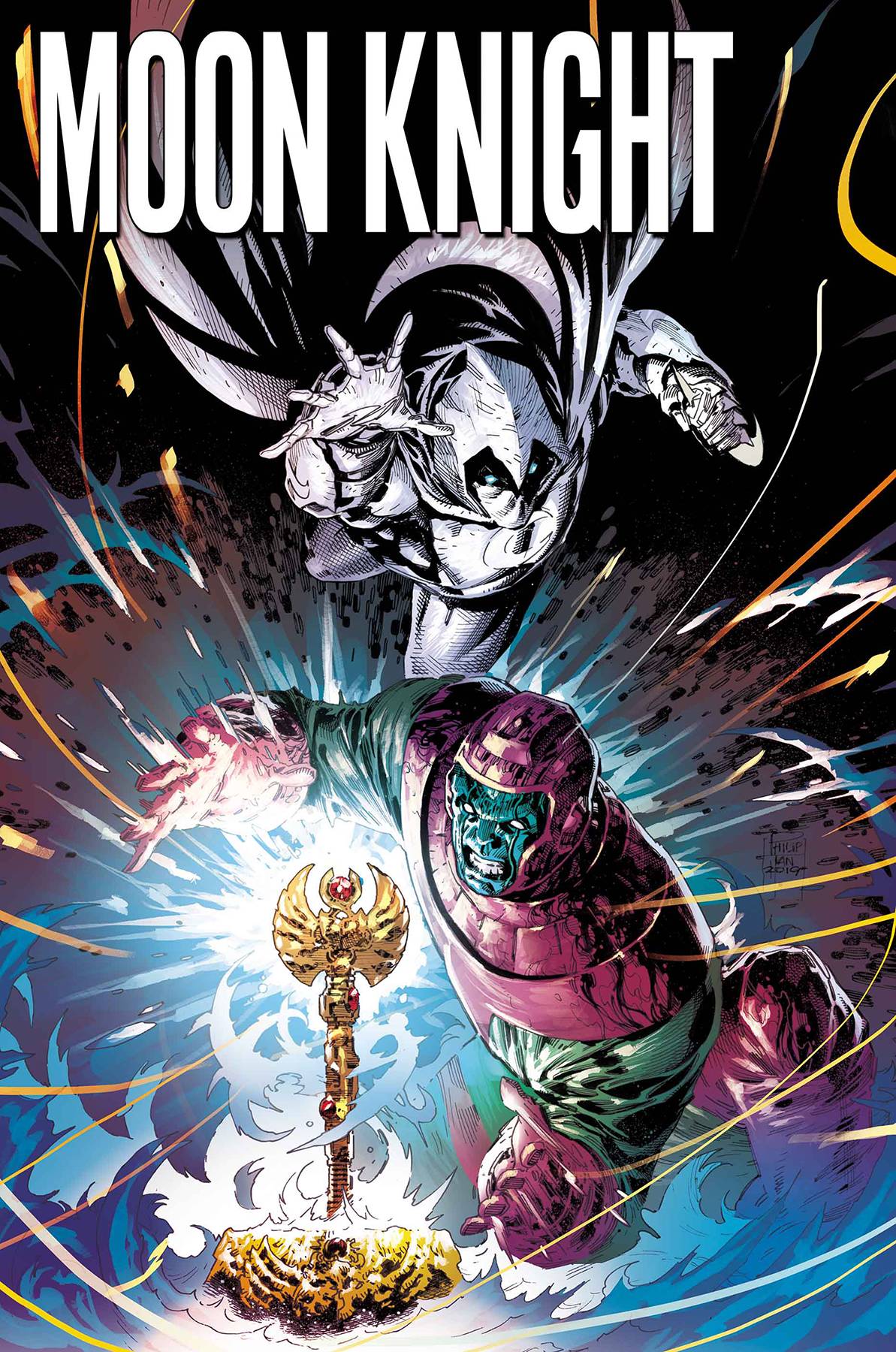 Finally from Marvel this week, Venom #18 is on FOC and features an awesome “immortal” wraparound variant cover by Will Sliney! ABSOLUTE CARNAGE TIE-IN!Carnage's unlikely and symbiotic allies swarm Venom and his family!As all hell continues to break loose as Carnage's army swarms the streets of New York, Eddie Brock has his hands full at Rex's Warehouse! 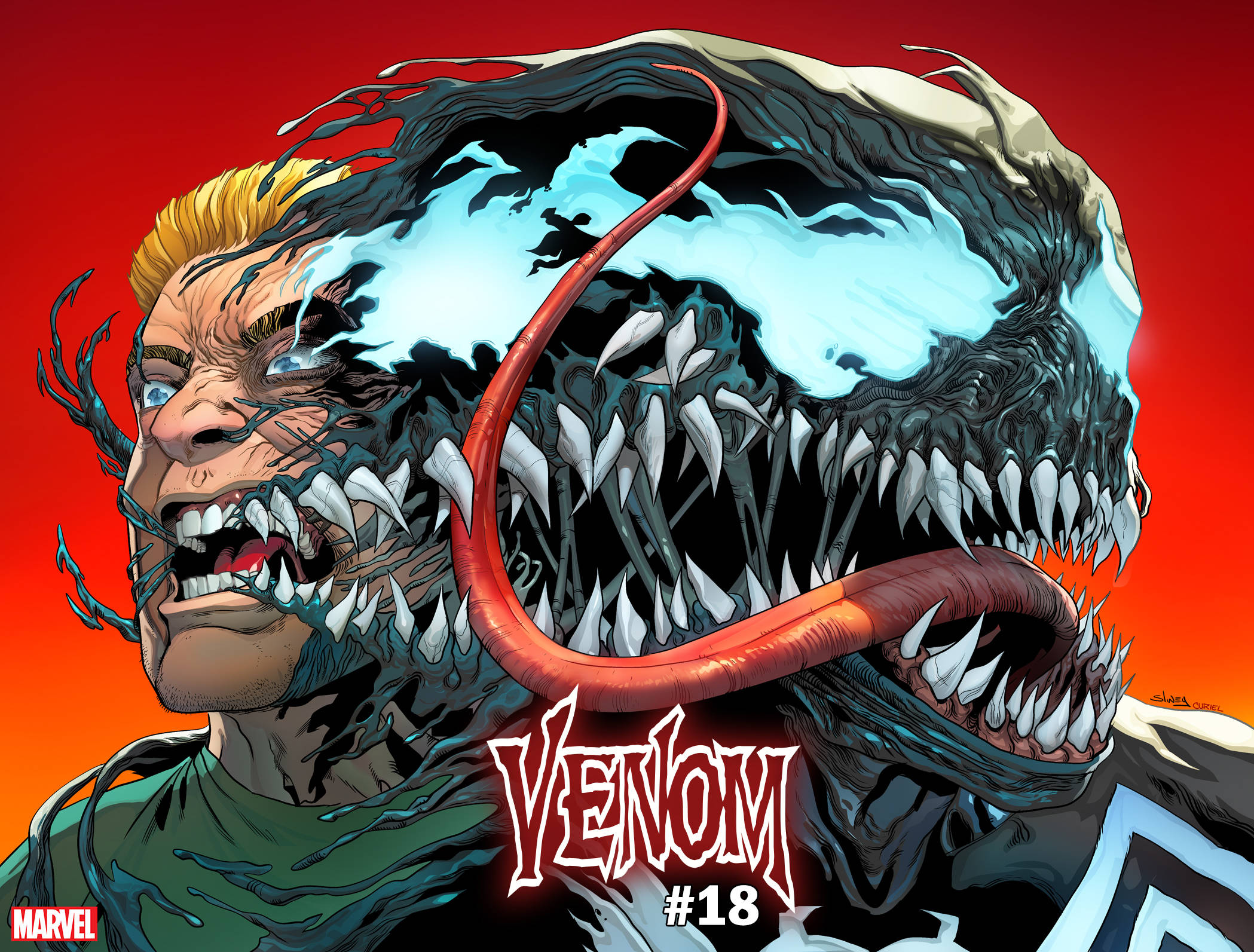 From Boom! Studios and in stores on 9/11 is the Second Print cover to Something is Killing the Children #1! That’s right, we told you all about this new series last week. The first print is sold out and the second print features a new cover by Dani and will be in stores on 9/11! 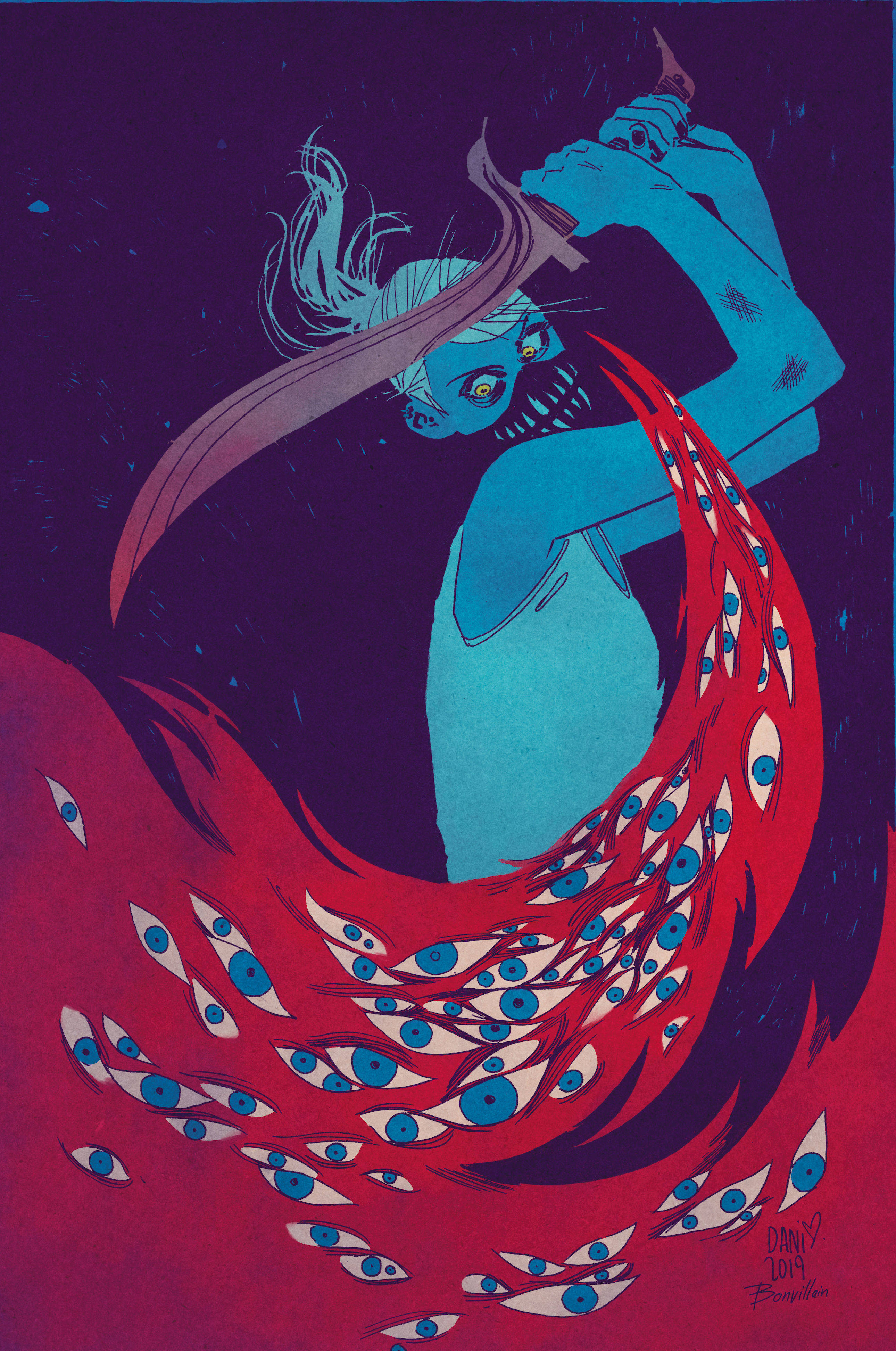 From Dynamite Comics and in stores on 9/11 is Chastity #1! Chastity Jack has been kidnapped, to the great misfortune of her kidnappers. She, along with a dozen other young women, arrive at an audition for a prestigious New York City burlesque act hoping to land a coveted spot in the popular show. When they wake up in chains on a spooky cruise ship in the middle of nowhere, they're congratulated on joining the cast. Realizing they've been drugged and kidnapped by human traffickers, Chastity Jack declines the offer. Grindhouse-style. 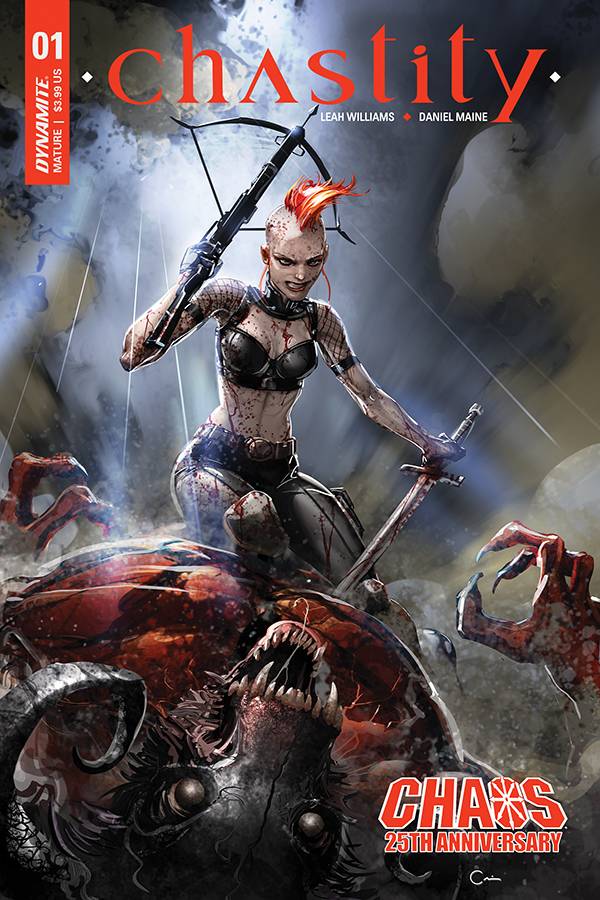 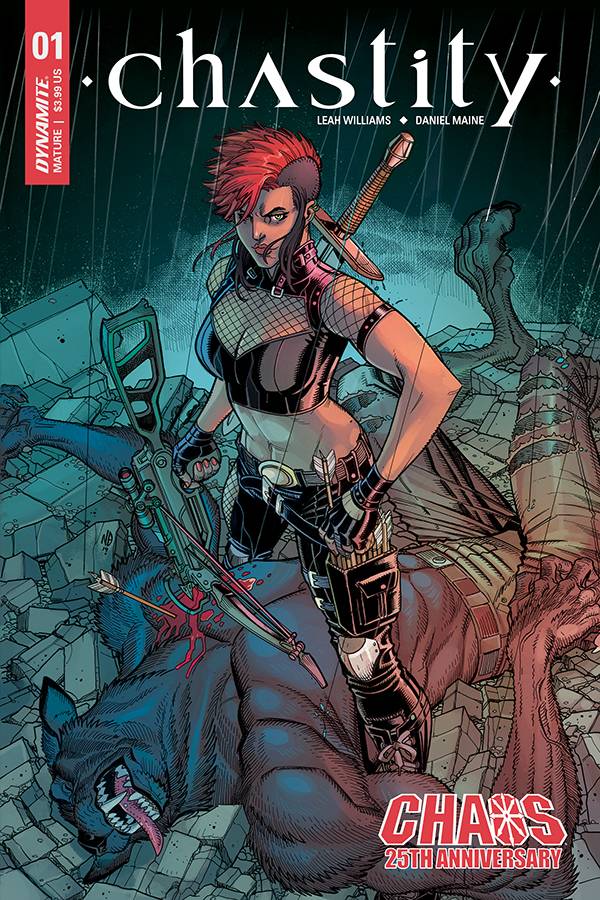 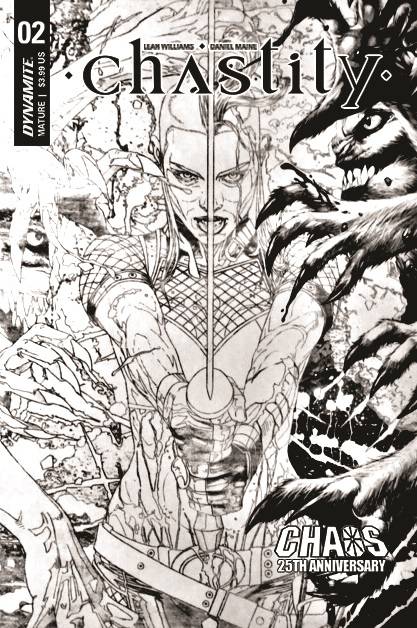 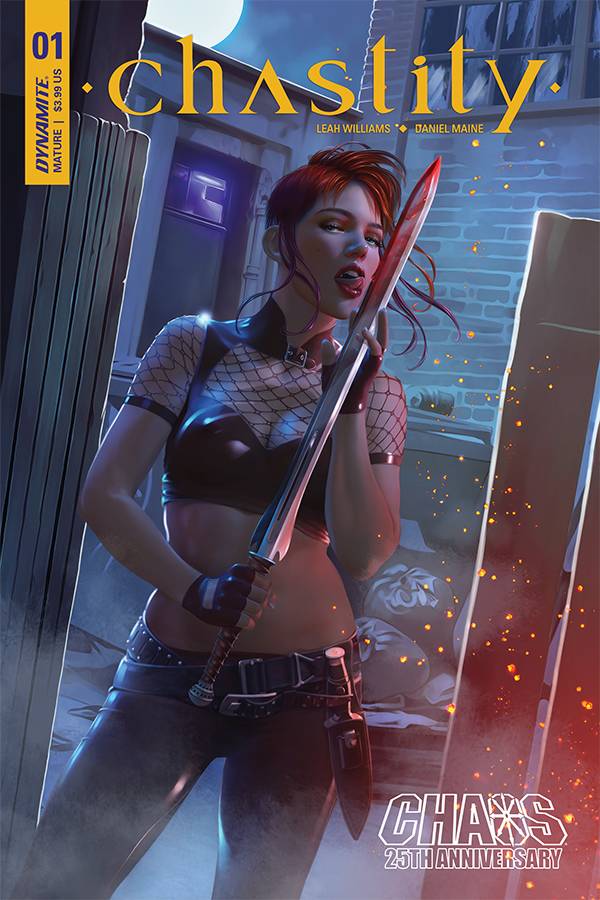 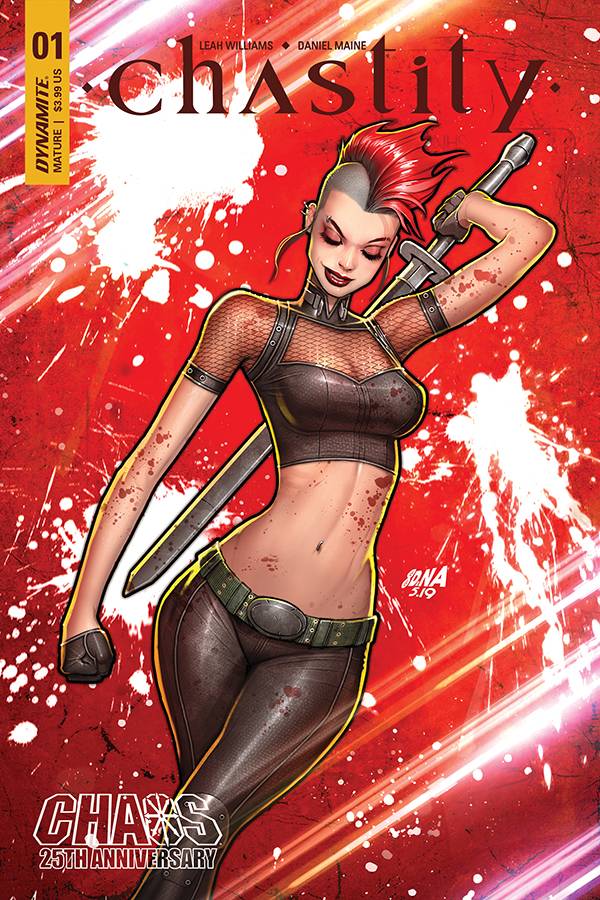 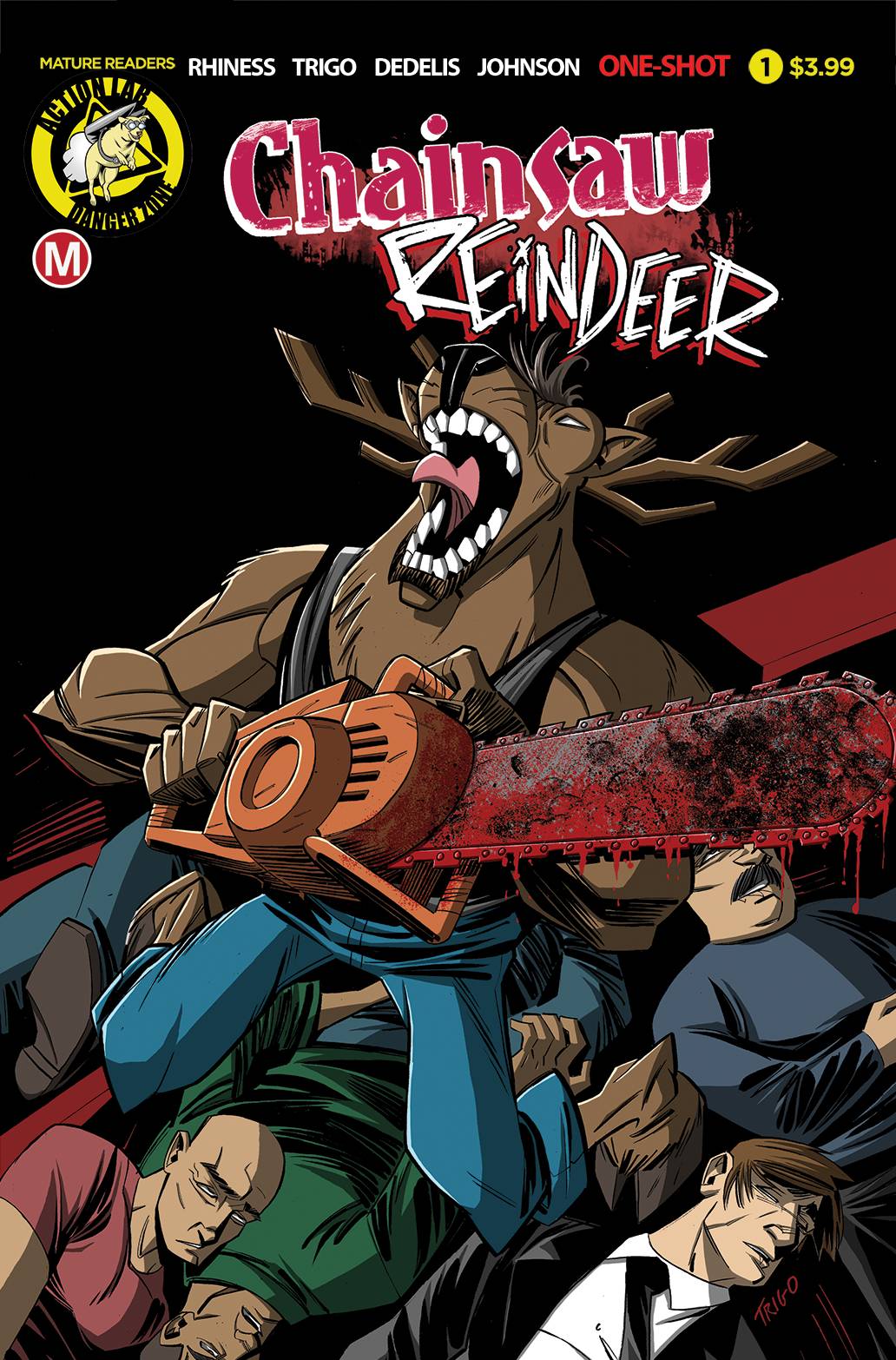