Happy New Comic Eve! Lots of fun stuff out this week so get ready to rumble!

From Dark Horse this week, Hellboy is back with the BPRD in Saturn Returns #1 (of 3). A small town in New Hampshire that has been plagued by disappearances is shaken when a local discovers a pile of corpses that date back decades, and Hellboy and B.P.R.D. Agent Kinsley arrive on the scene only to be overwhelmed by supernatural theories for the ritualistic killings. Mike Mignola and Scott Allie team up with veteran Mignolaverse artist Christopher Mitten, along with new colorist Brennan Wagner and letterer Clem Robins. 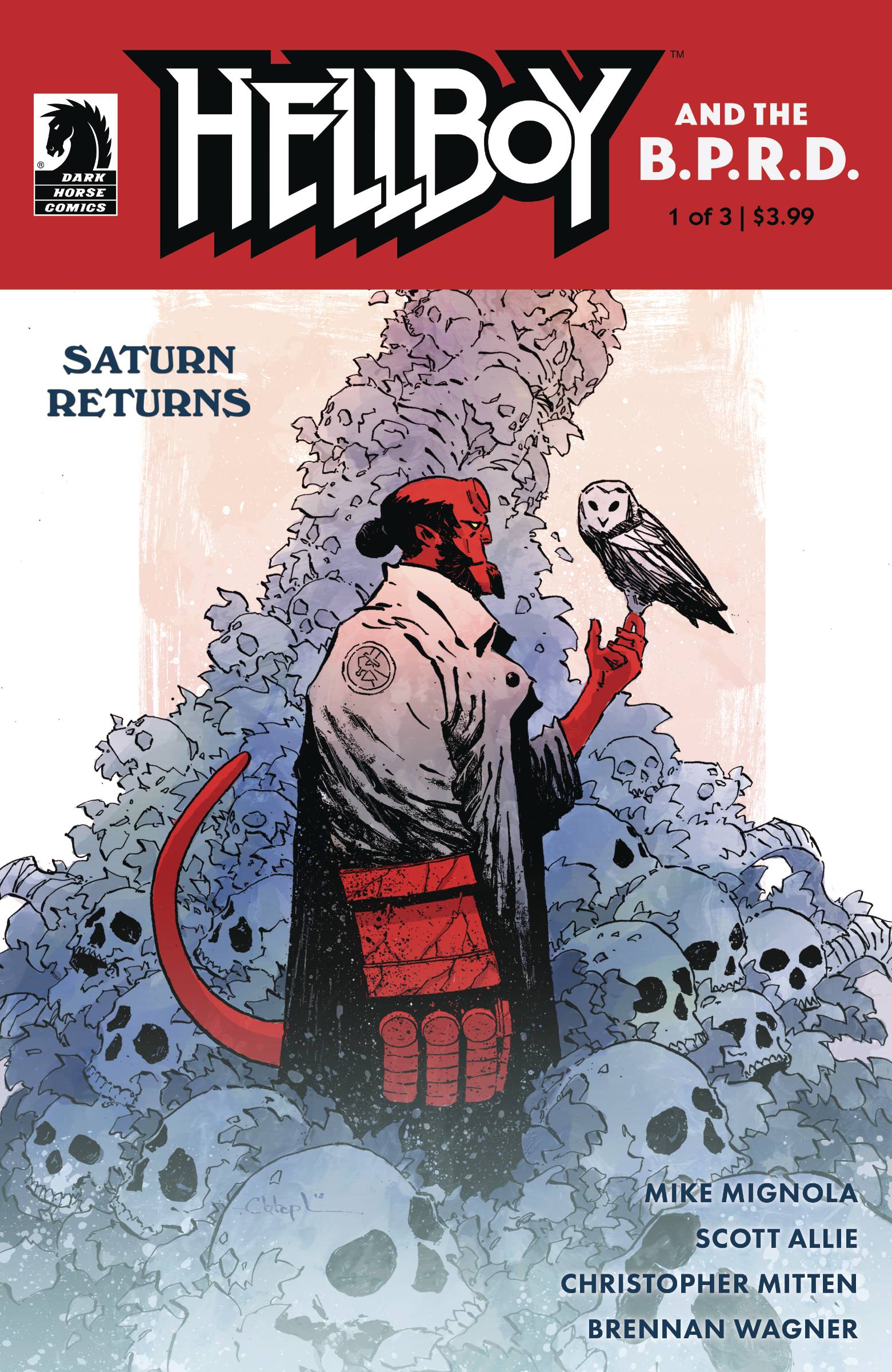 Also from Dark Horse this week is Strayed #1 (of 5). In the far future, a military-industrial complex reigns over all humanity and actively destroys distant alien worlds. The galaxy's only hope can be found through an unlikely pair: an astral-projecting cat named Lou and his loving owner Kiara. Trading nine lives for the well-being of billions, their revolt is a battle for love, friendship, compassion, and the soul of humanity. 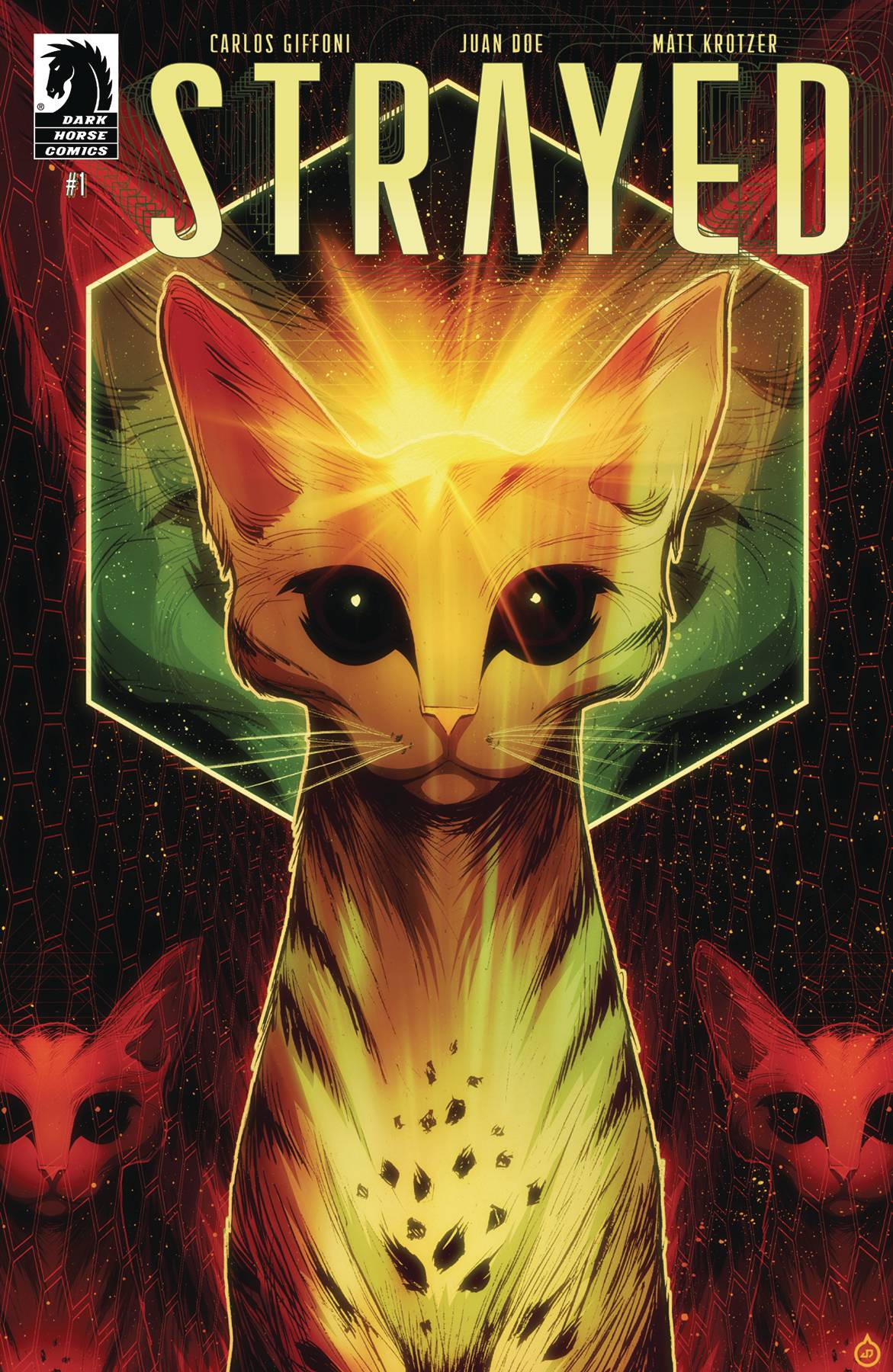 From DC this Batman #232 Facsimile Edition hits the stands! The story that introduced Ra's al Ghul is reprinted in the first of DC's new line of facsimile edition comics. In "Daughter of the Demon," Ra's reveals that he knows Batman's secret identity-and that he needs the Caped Crusader's help to save his daughter, Talia. It's a tale that established Ra's al Ghul as one of Batman's most cunning and unpredictable foes! 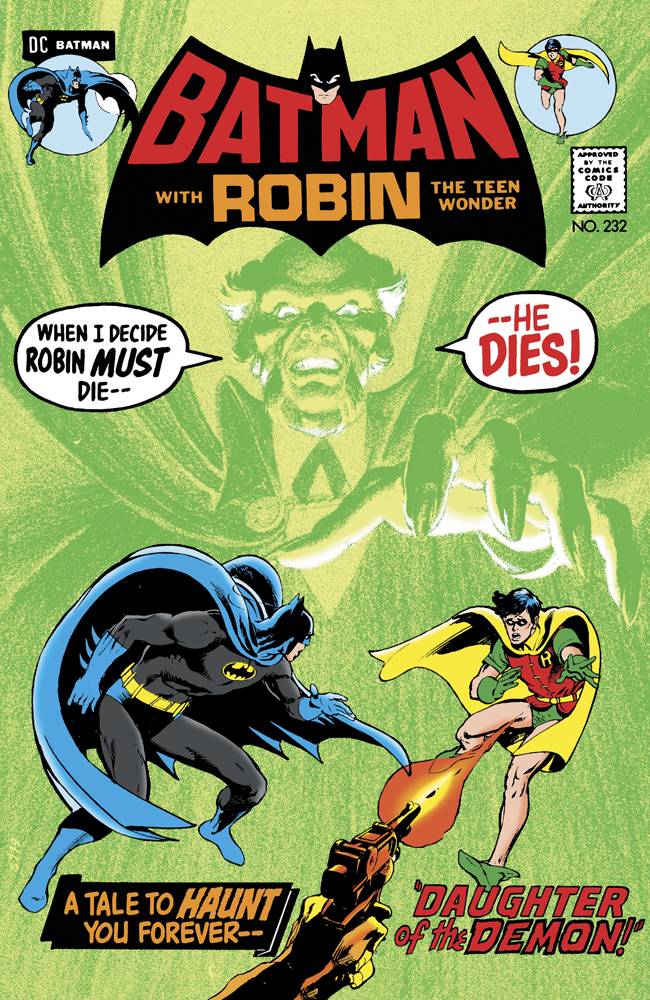 Next up from DC this week is Batman #77. You won’t want to miss this issue! "City of Bane" continues! The last of the independent villains are on the run, leaving Gotham City entirely to Bane and his cronies-including Flashpoint Batman and Gotham Girl! Though this means a semblance of peace on the streets, the iron grip of tyranny is squeezing all life out of Gotham. And with Bane's machinations keeping other heroes out, the city really needs the Batman to return. Is Bruce Wayne ready to face his toughest foes yet...his father and the man who broke his back? 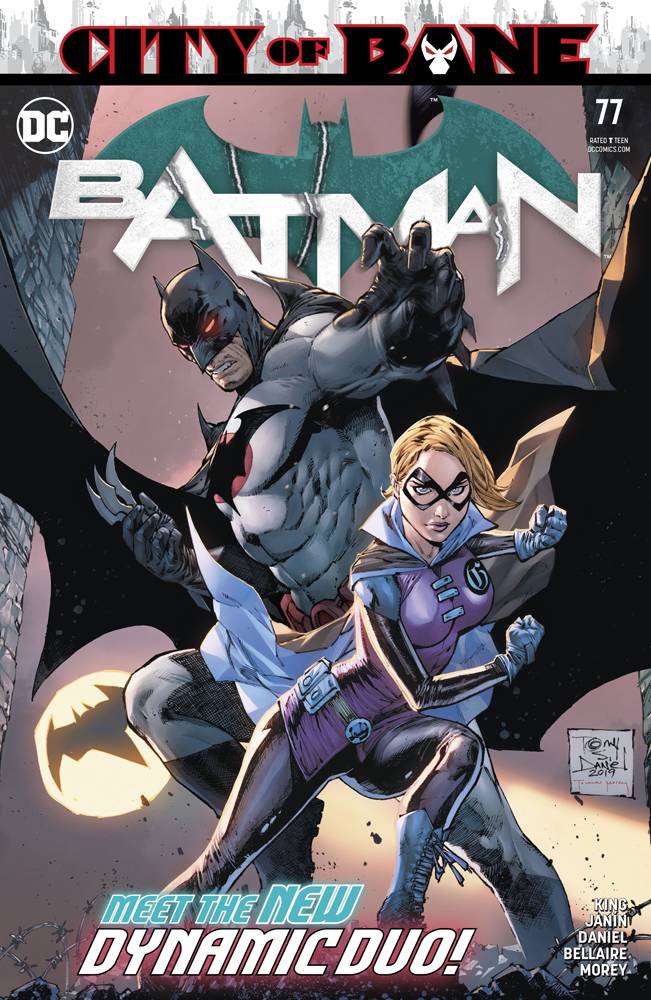 Next from DC this week is Black Mask Year of the Villain #1! Black Mask was one of Gotham City's most ruthless crime lords. He had money, power and respect. But after months in the Teen Titans' secret prison, Roman Sionis is finally free. Given a new purpose and new abilities thanks to Lex Luthor's offer, he's found a new racket. Corporate crime not only pays better, but it's far less dangerous. At least until Batwoman discovers what he's up to and plans to put an end to Black Mask's latest power grab. Is Black Mask the same crime boss he's always been, or has time and a new approach made him something far more unstoppable than he's ever been? 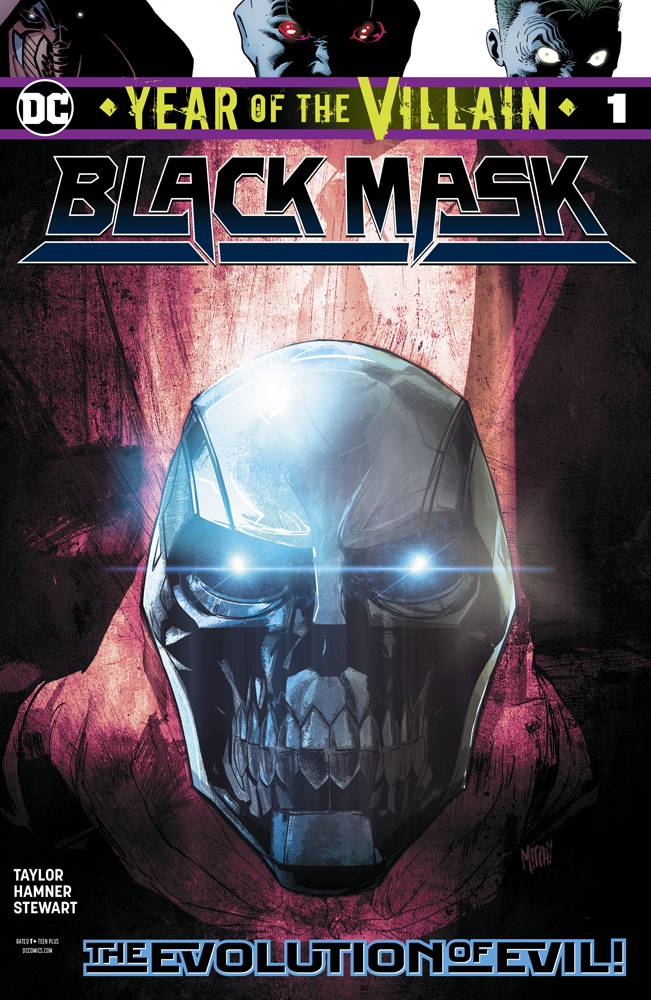 From IDW this week comes Marvel Action Captain Marvel #1 (of 3). Go higher, further, and faster with Captain Marvel in this brand-new, all-ages adventure! Carol Danvers' quiet night with BFF Jessica Drew (a.k.a. Spider-Woman) takes a cat-astrophic turn when Manhattan's bodegas are suddenly overrun by a host of angry felines! And not just any felines-Flerkens, the most terrifying, pocket-dimension-holding, tentacle-devouring kitty-look-alikes in the entire universe! Carol's paw-sitive she can handle the situation on her own, but questions remain: can she overcome the fur-midible foes before it's too late? How well does the "Find My Phone" function actually work? And will there be more cat puns?! It's a Flerken invasion in the latest addition to the mighty Marvel Action banner! Sam Maggs and Sweeney Boo make their Marvel Action debut! 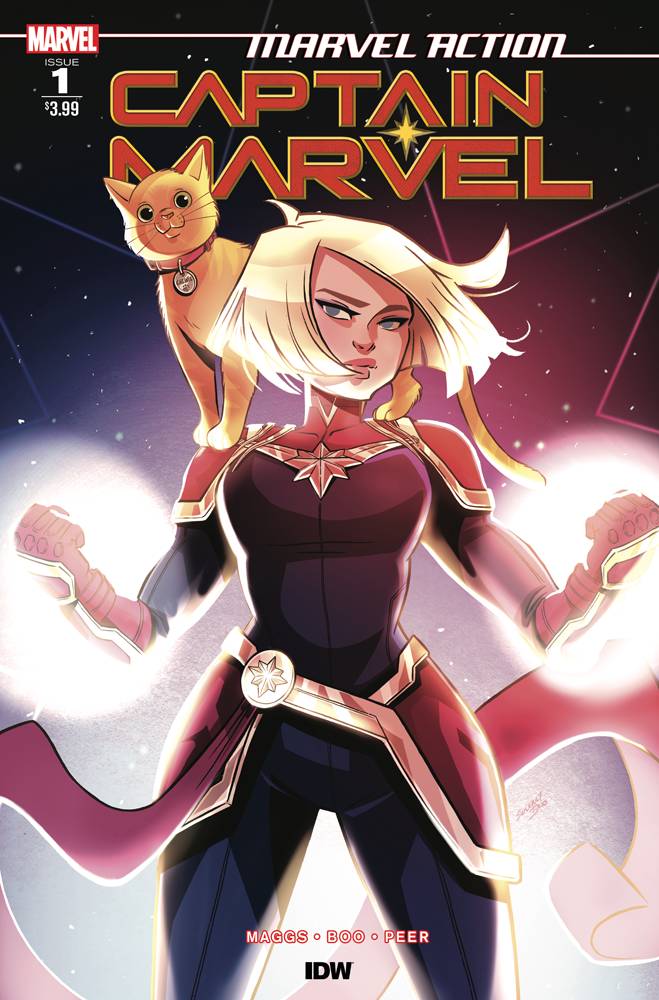 Next up from IDW is Transformers 1984 #0! An all-new prequel to the original 1984 Transformers #1! Celebrating 35 years of Transformers!War has gripped the planet Cybertron, but an even deadlier threat looms-an asteroid belt powerful enough to destroy the metal world unless Autobot Field Commander Optimus Prime and his heroic recruits can clear a path for the planet. But what other motivations does Prime have for this mission? And how does it tie to a secret on Earth in the eleventh century? Celebrating 35 years of TRANSFORMERS!Reuniting the Transformers: Regeneration One team of Simon Furman and Guido Guidi! 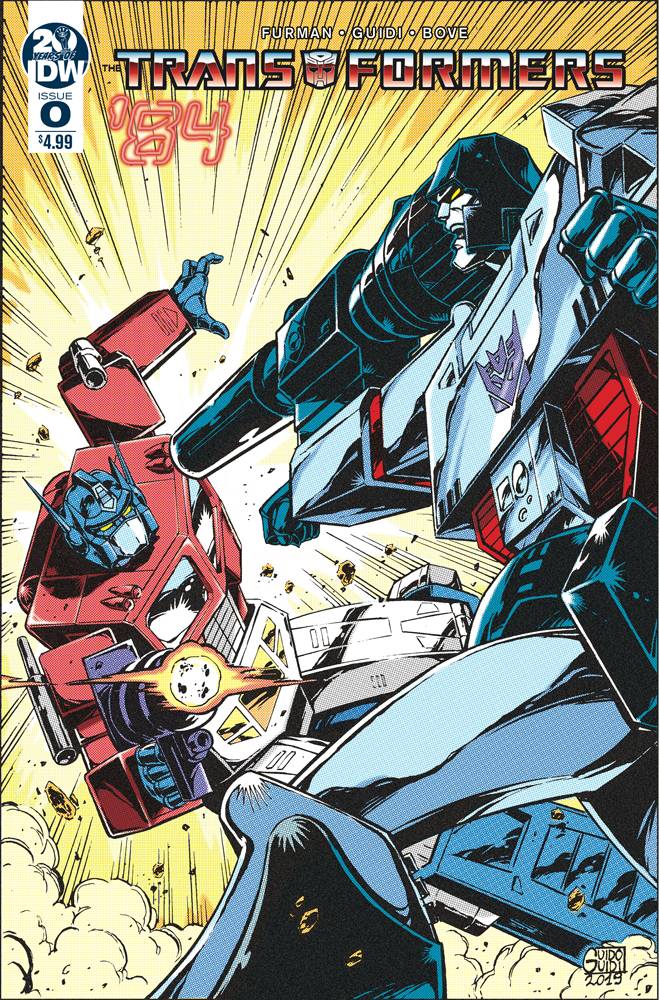 From Image this week, Pretty Violent #1 hits the stands! Gamma Rae wants to be a superhero, and why shouldn't she!? She's been strong since she was a baby. The only problem is, all her siblings are notorious hero-murdering criminals! Join artist DEREK HUNTER (DuckTales, Adventure Time), and writer JASON YOUNG (I HATE FAIRYLAND) for this all-new ongoing, gore-filled, laugh-out-loud comedy for mature readers that explores one girl's journey through the rift between personal and family identity. 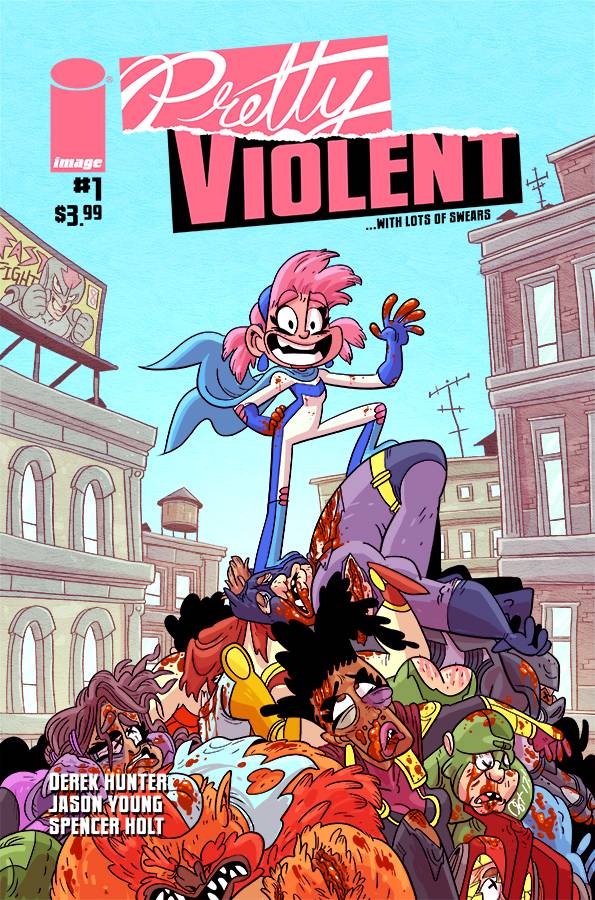 From Marvel this week, Absolute Carnage Vs Deadpool #1 (of 3) hits the racks! At long last, Deadpool is ready to get his head straight and checks himself into Ravencroft Institute.Unfortunately, there's another new arrival: CARNAGE! But I don't think he's here for a group therapy session...Madness and mayhem abound in the can't-miss showdown of the year! 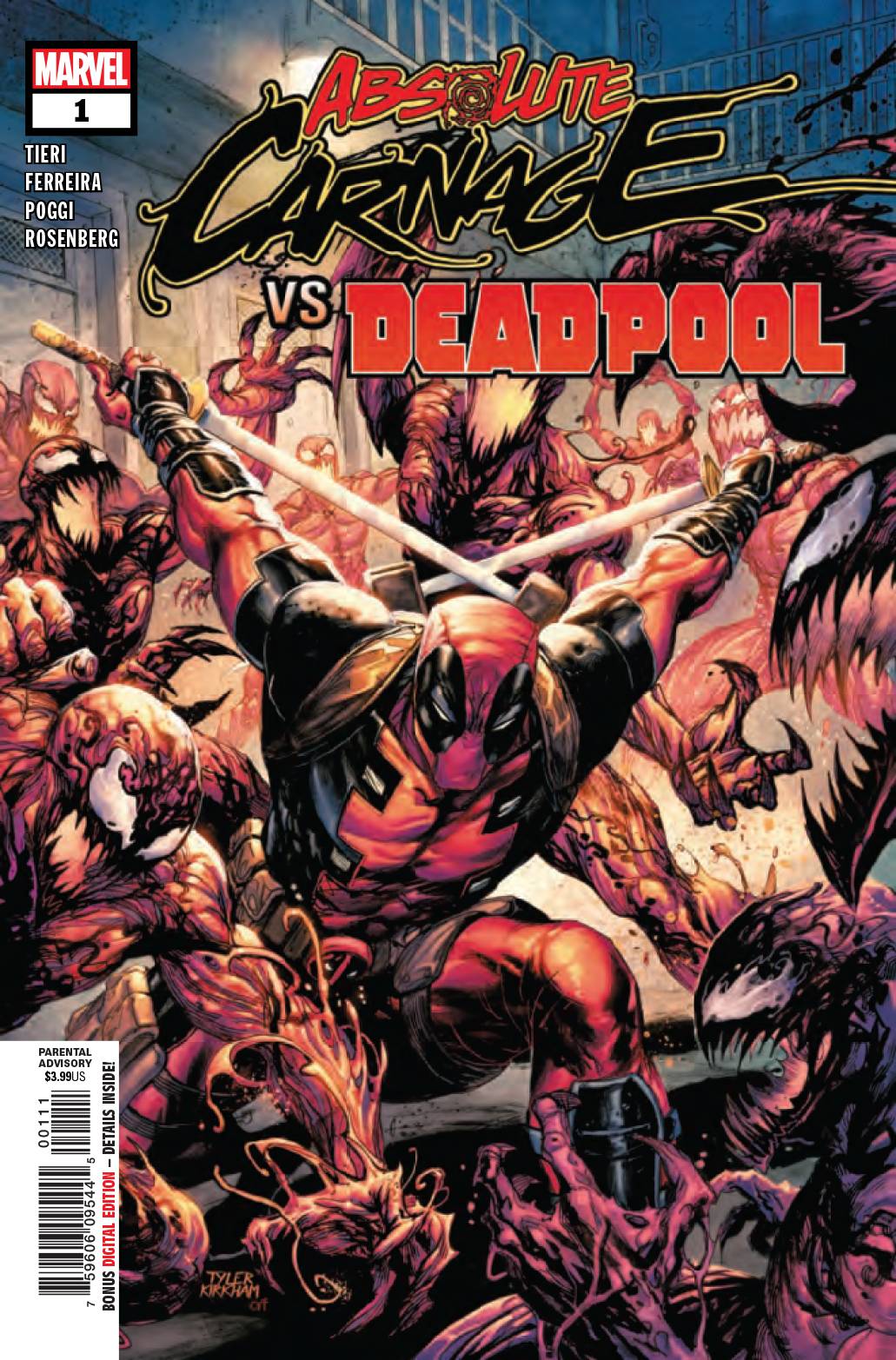 Next from Marvel is Deadpool Annual #1! Eight-year-old Peter Quincy is willing to pay seven dollars to the person who can kill his bad dreams, and the Merc with a Mouth is on the case! But if Deadpool wants to earn that sweet, sweet paper, he's going to have to throw down with Nightmare himself! 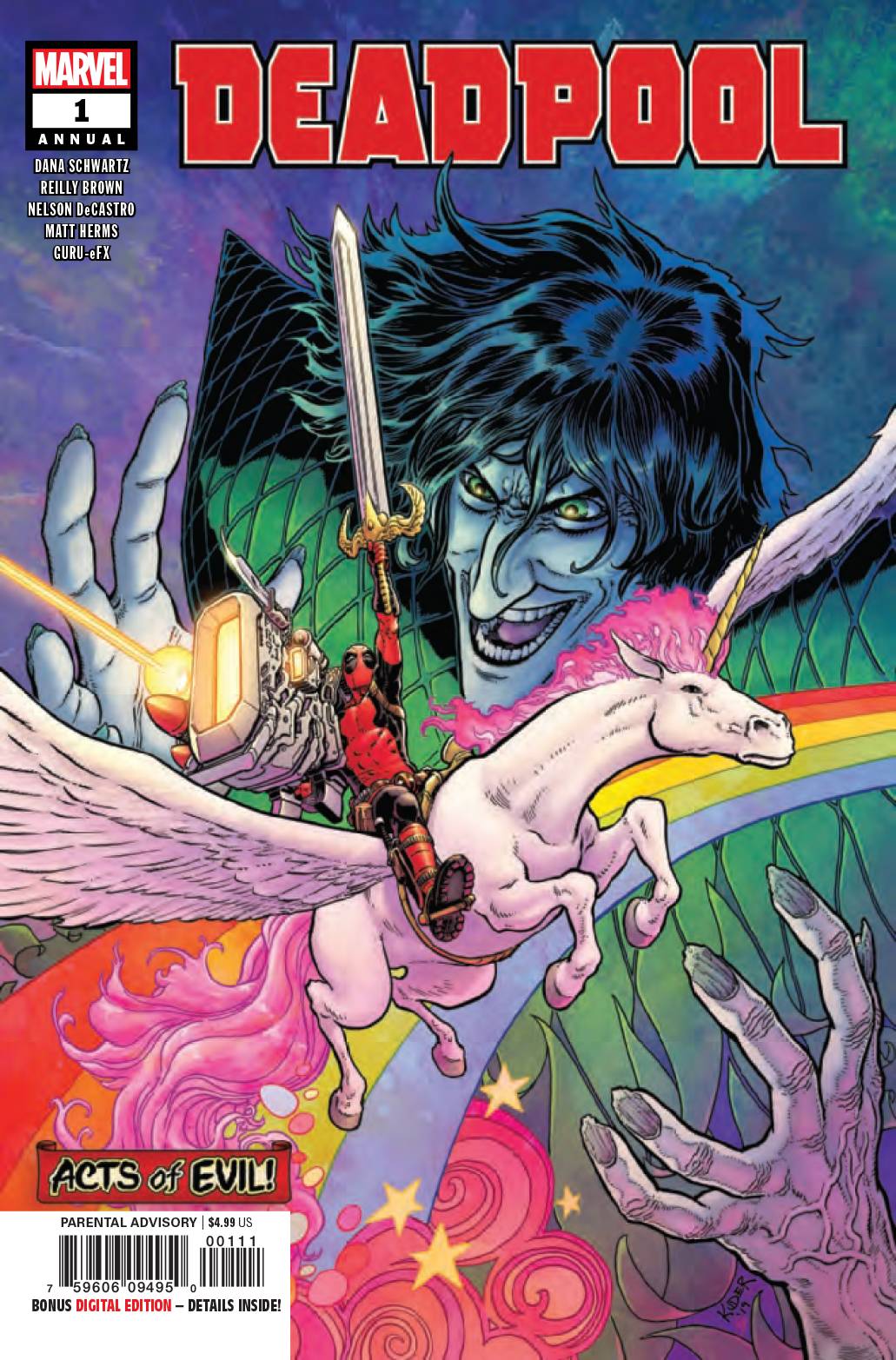 Making her debut in the Marvel 616 Universe is Ghost Spider #1! With a cloud of infamy hanging over her head on Earth-65, GWEN STACY now travels to Earth-616 for super hero action...and school?!The newest student at ESU is about to get a crash course in multiversity as she splits her time between the world she loves and the world she's just getting to know!But what devious villain has eyes on Gwen's travels?Is Gwen ready for what comes next? 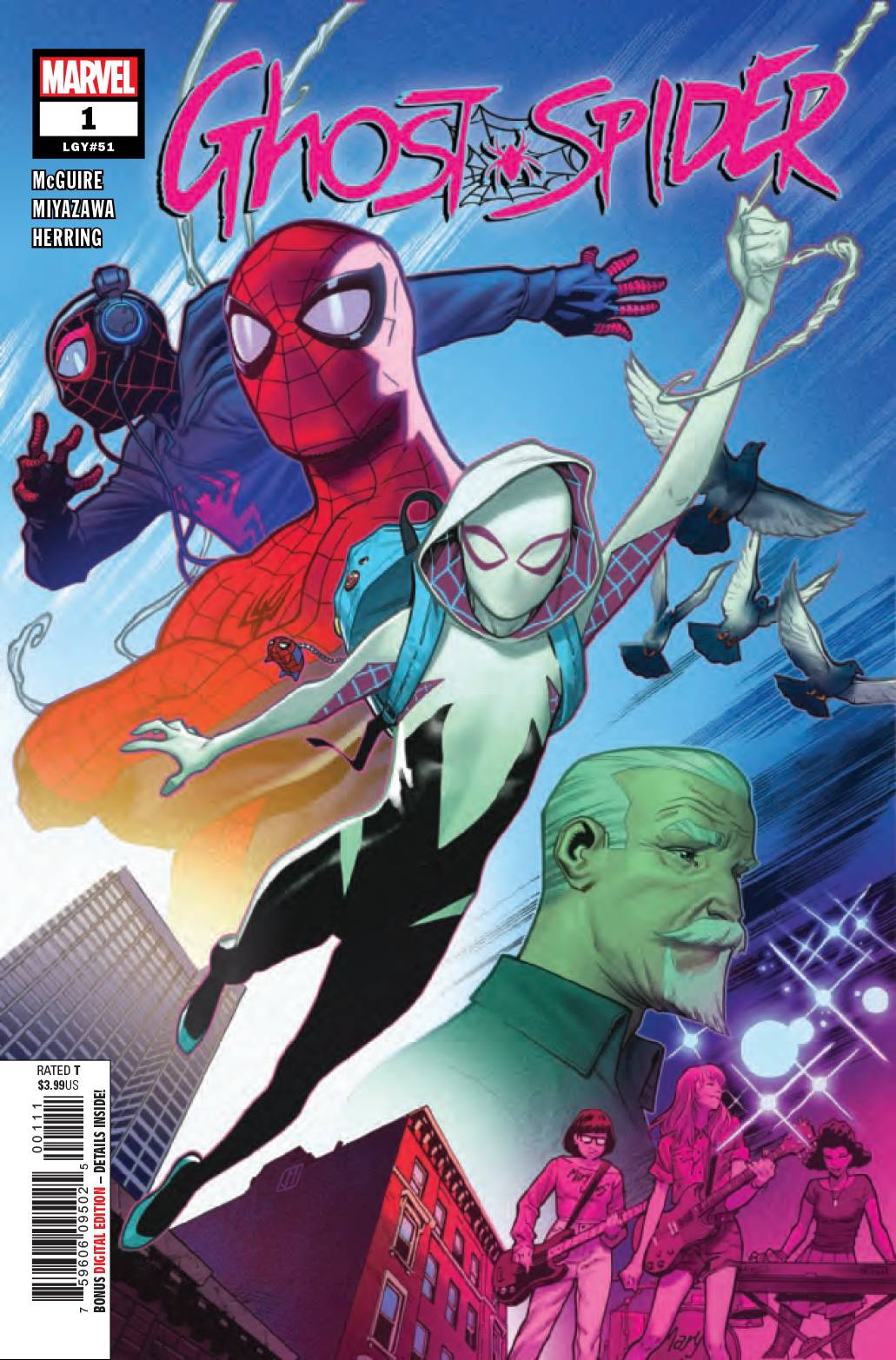 From AfterShock this week comes Bad Reception #1! It's the celebrity wedding of the century, set in an undisclosed, remote location, with no access to wifi, cell phone reception or the outside world. But the dream wedding becomes a nightmare when, one by one, the guests are brutally slaugh-tered by a serial killer who brands his victims with a hashtag. BAD RECEPTION is a searing horror story that doubles as a topical, satirical critique on society's obsession with technology, social media and the cult of celebrity. Written and drawn by AfterShock's very own Juan Doe (DARK ARK, AMERICAN MONSTER, WORLD READER)! 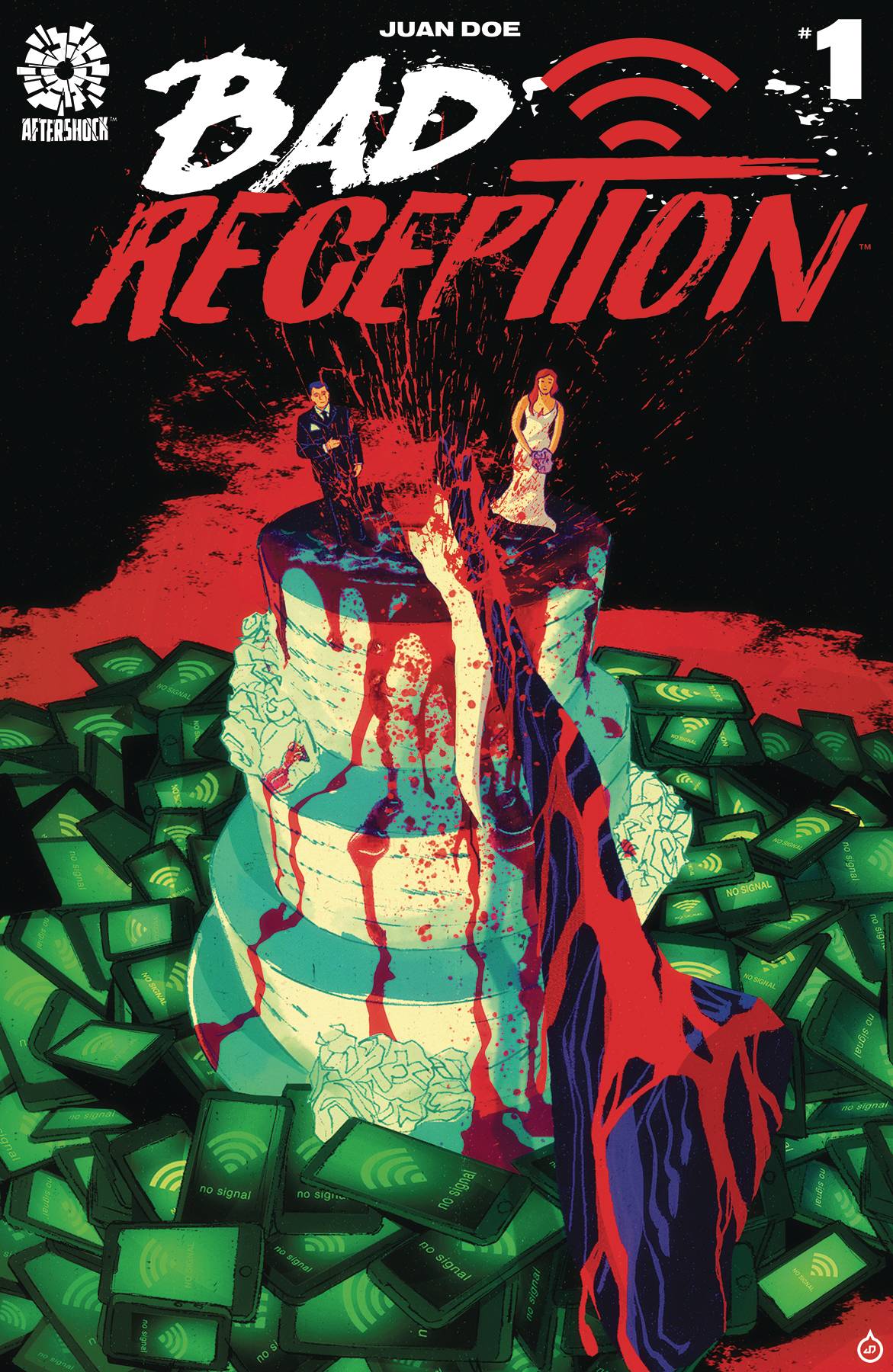 Last Stop on the Red Line #3

American Gods Moment of the Storm #5

Black Mask Year of the Villain #1

Wonder Woman Come Back TO Me #2

Red Sonja Birth of She Devil #3

TMNT Rise of TMNT Sound Off #2

Guardians of the Galaxy #8

History of the Marvel Universe #2